Everybody loves a good KO and thankfully, UFC 236 is filled to the brim with some of the best knockout artists among UFC fighters. (To order the PPV, go here.)

While headliners Max Holloway and Dustin Poirier aren’t known for being knockout artists, just about every other fight offered on the card includes a fighter who loves to hunt for the knockout. With so much power loaded up onto a singular card, UFC 236 is shaping up to be one of the most fun cards in recent memory.

Here’s our list of the top five knockout artists competing at UFC 236:

One of the UFC’s brightest prospects, Israel “The Last Stylebender” Adesanya has a perfect 16-0 record to go along with his unorthodox and effective style. With 13 of his 16 wins coming by either TKO or KO, Adesanya is quickly establishing himself as one of the best knockout artists among UFC fighters. Possessing one of the most unusual stand-up games in the sport, Adesanya has a diverse array of moves in his arsenal. He’s equally comfortable deploying at any point during a fight.

Despite not possessing true “one-punch” knockout power, Adesanya is extremely well versed in rocking his opponent with one of his various unorthodox strikes before jumping in with a flurry of punches for the kill. For example, take his recent fight against top middleweight Derek Brunson. While Adesanya didn’t necessarily clean him out with a single punch, he used a barrage of knees, head kicks, and vicious punches from awkward angles to repeatedly stumble Brunson. After yet another knockdown from a stiff uppercut, referee Herb Dean jumped in to call the fight just before the first round bell.

At UFC 236, Adesanya gets his toughest test yet in fourth-ranked middleweight and highly regarded wrestler Kelvin Gastelum. Gastelum has been a top contender in UFC for some time and serves as an excellent gatekeeper into the top tier of middleweights. Think of him as what Kenny Florian was to the lightweight division. The man retired Michael Bisping and is coming off a huge split decision victory over Brazilian Jiu-Jitsu legend Ronaldo “Jacare” Souza in Souza’s backyard. Despite his wrestling chops, Gastelum has been known to occasionally stand and bang with other fighters, so look for fireworks in this affair.

A power puncher, Khalil Rountree Jr. is one of the hardest hitting UFC fighters. Although he’s coming off a tough knockout loss at the hands of Johnny Walker, Rountree has shown some off explosive power time and time again.

In addition to possessing one-punch knockout power, Rountree also has the type of heavy hands that can brutalize their way through an opponent’s guard with relative ease. Although still a fairly raw prospect in terms of his overall technical skills, there’s no doubt that Rountree Jr. is one of the best pound-for-pound punchers on UFC’s roster. That power alone makes him one of the most dangerous matchups for any UFC light heavyweight fighter.

At UFC 236, Rountree looks to rebound from his loss to Walker with another fighter who sits just a bit further down this list – Eryk Anders. The fight should be a stand-and-bang affair between two fighters who pride themselves on their ability to put opponents to sleep. There’s a very good chance this fight doesn’t make it out of the first round, setting it up as a prime candidate for a “knockout of the night” affair. 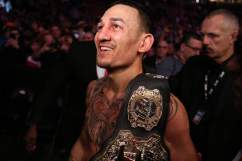 Though he’s not the most skilled fighter, Dwight “The Body Snatcher” Grant heads out every single fight looking to put his opponent face down on the canvas. A relative newcomer to UFC forced to take off extended time due to an “eye issue” per ESPN’s Ariel Helwani, Grant is looking to get his heavy hands back in action and work to establish his case as one of the best UFC knockout artists.

Possessing lighting-fast hands for the welterweight division, Grant is able to slip in powerful shots at a moment’s notice. For example, take his fight against Carlo Pedersoli. Right as the round is about to end, he slips in a vicious ducking overhand right as Pedersoli winds up to throw a head kick. The shot sent Carlo’s mouthguard flying and surprised even the announcers, who had already started preparing to cut to a commercial break.

Heading into UFC 236, Grant draws fellow knockout artist Alan Jouban. Similar to the Rountree-Anders fight, there’s a minimal chance this fight gets taken to the ground. While it may take a round for the fighters to feel one another out, once they engage and open up, things should be over fairly quickly.

GettyAlan Jouban celebrates his knockout win over Richard Walsh in their welterweight bout during the UFC 184.

Speaking of Alan Jouban, he finds himself next up on the list of the best UFC knockout artists at UFC 236. A five-year UFC veteran, Jouban has established himself as a man that Dana White can safely call upon, knowing he will deliver an exciting fight. With four Fight of the Night awards and a number of highlight reel knockouts to his name, Jouban also possesses a sturdy chin, allowing him to feel comfortable standing toe to toe and exchanging with any welterweight on the UFC’s roster.

Jouban excels at getting inside on his opponents and unleashing a flurry of rapid punches or kicks that send his opponent crumbling to the canvas. But even though he has a solid chin, his propensity to stand in a phone booth and trade with opponents have given him his fair share of knockout losses. His recent matchup with Gunnar Nelson is the perfect example of this exact situation. While the decision technically went down as a submission, Jouban was rocked early and rather than finishing with punches, Nelson decided to lock in an easy guillotine on a defenseless Jouban.

His matchup with fellow standup specialist Dwight Grant promises to include fireworks. Especially with the raw hand speed and power that Grant brings into the matchup, Jouban will need to fight a bit smarter and make sure he isn’t leaving those small openings that Grant thrives on taking advantage of.

A former Alabama Crimson Tide linebacker, Eryk Anders initially made a relatively seamless transition to the MMA world. After racking up highlight-reel knockouts on the smaller circuit, Anders has struggled at times since stepping up to UFC. Despite coming off a two-fight losing streak, Anders has still shown flashes of the potential to be one of the best UFC knockout artists. Considering two of his three UFC wins have come via KO, it is safe to say that if he picks up the win, it most likely is thanks to his thunderous hands.

Anders isn’t shy of getting hit, and often finds himself in long grueling fights trading haymakers with his opponent. In recent fights to Lyoto Machida, Thiago Santos, and Elias Theodorou, Anders sustained significant damage as he tried to hunt for the knockout but was never able to make it happen. Despite the fact he couldn’t find his mark, he was extremely competitive in each of the matchups and even earned Fight of the Night honors for his war with Santos.

'Ya Boi' @ErykAnders is in search of his first LHW victory next Saturday. #UFC236 pic.twitter.com/lbMxXaSrgh

While Machida and Santos are wily veterans who used a smart gameplan to help neutralize Anders’ power, Rountree is a man who likes to stand and bang. Once again, don’t expect this fight to last very long at all.

Read More
ESPN Plus, Exclude, MMA, MMA News, UFC
The roster of UFC fighters on the card at UFC 236 contains a handful of the sport's best knockout artists.