Getty Bob Baffert's Improbable is one of the Preakness favorites.

Bob Baffert has all his eggs in one basket with just one horse, Improbable, in the 2019 Preakness. The horse was one of the favorites heading into the Kentucky Derby, but Improbable finished outside the top three in fourth despite a disqualification. With Mike Smith on the saddle for this race, Baffert is hoping Improbable can find the Winner’s Circle.

“We’re trying to spark any kind of magic we can,” Baffert noted to The Baltimore Sun. “The thing about Mike, he’s always liked this horse, and he’s seen him run. We’ve had a lot of luck together.”

Despite having one of the best jockeys in the world, Baffert admits that he is not as confident as he has been at the Preakness in past years. Baffert has an opportunity to own the outright record for most Preakness wins at eight, but the trainer is still waiting for Improbable to run his best race.

“I think he’s one of the best horses,” Baffert told The Baltimore Sun. “I’ve come in here before feeling like I really had it over them. But this one, he’s a nice horse who needs to improve…I don’t feel like he’s a favorite’s favorite kind of horse. He’s just one of the top horses, and they’ve got to make somebody the favorite…What we have here is a lot of parity. I think that’s why it’s a bigger field.”

Baffert has had success in all three Triple Crown races, but his track record at Pimlico has been top notch. Baffert admits the Preakness is his favorite race citing its “relaxed atmosphere.”

“This is my favorite leg of the Triple Crown because it’s a relaxed atmosphere, everyone’s in the same barn so we can hang out with each other,” Baffert noted to USA Today. “The tension of the Derby is over. I love this place.”

Baffert won the 2018 Preakness with Justify on his way to the Triple Crown. While there will be no Triple Crown in 2019, Baffert is hoping teaming up with Smith will at least give him another Preakness victory. Baffert still expects an exciting race even though Country House and Maximum Security are not running.

“We won’t have any of the Derby winners in there,” Baffert said, per Philly.com. “It’s still going to be an exciting race. To me, it’s still an important race. I really enjoy going to these races. I like the Preakness. I really enjoy it; it’s a lot of fun. The pressure is off. We go in there and have a good time… There are a lot of new shooters in here that look tough…So it’s not a gimme. I’m not going in there feeling like I know I have the heavy muscle. I think I have a really good horse, but it’s a pretty tough race.” 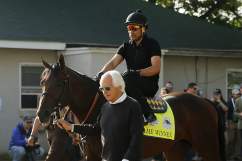