Only thing Brooks Koepka is looking to kiss today is the PGA Championship trophy @ForePlayPodpic.twitter.com/UWLEV3mslp

Brooks Koepka’s girlfriend, Jena Sims, cannot even break the golfer’s focus. Koepka walked in with Sims to the final round of the PGA Championship, and his girlfriend appeared to go in for the kiss. Koepka was having none of it as he continued to look forward. To be fair, Koepka was looking straight ahead and may not have even seen Sims’ attempt. This has not stopped the video from going viral.

Failed kiss attempts aside, the couple appears to have a great relationship. Sims is well-known in her own right as an actress and model. The actress has appeared in everything from Entourage to Sharknado. While her acting skills are on point, Sims admits that her poker face on the golf course is not as great. Sims is a regular at PGA Tour events and tries to get Koepka’s attention from time to time.

Lady and the Champ ??

The couple first met at the 2015 Masters, which has extra significance for Sims since she is a Georgia native.

“We met at the 2015 Masters,” Sims explained to Golf Digest. “And that’s so special because I’m from Georgia, so it’s perfect. We were on Hole 7, which I don’t even remember, but he’s like, ‘Oh, I remember what you were wearing, where we were standing, everything.’ It was cool. We hadn’t dated since then. We were just friends at that point.”

Some have pointed out that Koepka’s ascension on the PGA Tour has been closely tied to when he started dating Sims. Koepka’s girlfriend noted she is not sure if she can take credit for his success.

“He’s very aware of his success and the timing of our relationship,” Sims told Golf.com. “I can’t take the credit for that. All I can do is make him happy. I’m quirky and weird, I like to make him laugh. I encourage him to be himself.”

Brooks Girlfriend, Jena, Is the Founder of Pageant of Hope

Layups are for basketball ?

Sims is also active in the community and is passionate about giving back to kids. She started a non-profit organization called Pageant of Hope. Here is an overview of their work from the organization’s website.

We strive to lead children to recognize their full potential, helping them with communication skills, poise, stage presence, and grace. The Pageant of Hope has witnessed thousands of children transform within a day. We’ve seen shy young girls, who wouldn’t speak at the beginning of the day, storm the stage with the biggest smile across their face and exude confidence. Watched young men who were nervous to be apart of the Pageant take the stage and steal the show. 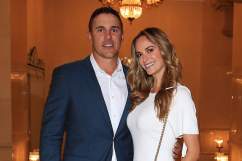