As the Celtics eye the off-season, the biggest question facing the franchise is what will happen with Kyrie Irving during NBA free agency. The Knicks, Lakers, Nets and Clippers are all teams that have been rumored to be possible landing spots for Irving. It is an interesting situation given Irving publicly committed to re-signing with the Celtics last October.

“I’ve shared it with some of my teammates, as well as the organization and everyone else in Boston,” Irving said at a Celtics season ticket event, per CBS Sports. “If you guys will have me back, I plan on re-signing here next year.”

Since then, Irving’s comments on his free agency have been convoluted. During his NBA All-Star media availability in February, Irving noted he had “every intent to sign back” but also pushed back that he did not “owe anybody s—.”

“At the end of the day, I spent the last eight years trying to do what everybody else wanted me to do, in terms of making my decisions and trying to validate through the media, through other personnel, managers, anybody in this business,” Irving said, per The Ringer. “And I don’t owe anybody shit. So for me, I think the confidence I have in myself and my abilities, I want to be able to control what I want to control.”

This combined with the viral video of Irving talking with Kevin Durant about “two max contracts” has Celtics fans wondering if Irving will be wearing a different jersey next season.

The Nets & Knicks Are Favored to Sign Kyrie Irving

The Nets have the best odds to land Kyrie ?

The latest Vegas odds have the Nets as the favorite to sign Irving at +250. The Knicks are next in line at +300 followed by the Celtics at +350 with odds to re-sign the all-star point guard. The two L.A. teams round out the favorites with the Lakers (+750) and Clippers (+1000) in striking distance.

Brooklyn’s Jared Dudley noted to The New York Times that he would be “shocked” if the Nets do not get a free agent meeting with Irving. It is worth noting that it is the New York and Los Angeles markets that will likely be competing for Irving in free agency.

Durant and Irving continue to be linked together. Both have been open about their friendship and appreciation of each other’s game. The Athletic’s Frank Isola reported that Durant only wants to join the Knicks if he can be paired with Irving or another star player.

The belief is that Durant will only join the Knicks if another high-level free agent agrees to sign with the Knicks as well. The most likely candidate is the Celtics’ Kyrie Irving, who coincidentally won a championship in Cleveland as Robin to LeBron’s Batman. He could fill that same role at MSG. So sure are some executives and player agents of a Durant-Irving pairing in New York that one agent told The Athletic that Durant and Irving are debating on who will sign first. Why is that important? The player that is signed second is viewed as the follower, not the leader. It’s all rather silly and Knick fans shouldn’t care if Durant and Irving synchronize their signings down to the exact second. But these are the things NBA players think about it

A Potential LeBron & Kyrie Reunion in L.A. Has Been Mentioned

LeBron James will also be shopping for a second star this offseason. The Lakers have been mentioned as a possibility for Irving as it appears the two stars have patched up whatever differences they had in Cleveland. Back in January, Irving admitted he called James to apologize.

Fans will have to wait for free agency to heat up to see where Irving will land. July 1st marks the first day NBA free agents can meet with teams and verbally agree to deals. Contracts cannot be signed until July 6th.

While it is still very early to pick Irving’s landing spot, my prediction would be Irving lands with the Knicks after Durant commits to New York. The Lakers appear very much a possibility but are the runner-up in my early prediction. 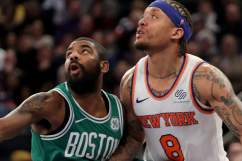