Getty The New York Knicks are expected to be one of the top suitors for Kyrie Irving in free agency.

Kyrie Irving may have played his last game for the Boston Celtics, and the New York Knicks continue to be mentioned as a top landing spot for Irving. Bleacher Report’s Howard Beck reported in April that many NBA executives expect Irving to join Kevin Durant in New York.

If you want rumors and predictions, they’re not hard to find in this gossipy league.

Rival executives will tell you, without hesitation, that Durant is bound for the Knicks; that Irving is likely to join him; that Leonard likes the Clippers; that Butler might choose the Lakers—unless he chooses the Nets.

Of course, they all might stay put. (Well, except for Durant. Virtually everyone believes he’s leaving the Warriors.) No one knows for sure. Predictions are flimsy.

Such is the latest in the saga of Irving in Boston. Irving started the season publicly committing his allegiance to Celtics green then spent the season surrounded with rumors of his exit.

It is a short clip with just a few words, but it could come back to haunt Irving. The all-star guard decided to publicly pledge his intent to re-sign with the Celtics when his free agency hit in 2019.

“I’ve shared it with some of my teammates as well as the organization as well as everyone else in Boston,” Irving said at a Celtics season ticket holder event in October, per ESPN. “If you guys will have me back, I plan on re-signing here next year.”

All this seems like a lifetime ago when the Celtics were an NBA title contender. Irving was healthy and added to a Celtics team just coming off a deep playoff run. These words are far from binding and, while it could be a PR nightmare, it does not mean Irving is bound by his comments

Then came the video of Irving having what he believed to be a private conversation with Durant during NBA All-Star Weekend. The audio is far from crisp and appears to show Irving talking to Durant about the Knicks having two max contracts. Irving seemed annoyed that the conversation was caught on camera, but did not offer a denouncement of the interpretation.

“It’s a video of me and one of my best friends talking,” Irving told the Boston Globe. “And then it turns out to be a dissection of a free agency meeting? Do you get that? Like, do you get that? And then I’m asked questions about that? That’s what disconnects me from all that s***.”

The Knicks Are Listed Second in the Odds to Sign Kyrie

The Knicks chances of signing Irving depend on who you ask. The latest odds from Cesar’s Palace has the Knicks second in the odds at +300 behind the Nets chances at +250. It is still early to predict exactly what will happen in free agency with so many moving parts.

Ryen Russillo reported on The Bill Simmons podcast that he is hearing that Irving may want to join Durant with the Knicks, but does not want to play Robin to KD’s Batman. With how much Durant has discussed Irving in a glowing manner, the Knicks would be the favorite to land Irving if they get a commitment from Durant.

Sometimes, these rumors prove to be true as we saw with LeBron James and the Lakers. Other times, free agents can surprise as Paul George did when he re-signed with the Thunder. 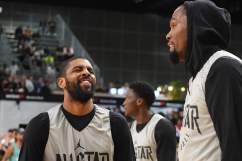