Los Angeles is the place where movies are made, and the Lakers dysfunction looks like it could be its own film. LeBron James’ agent, Rich Paul, appears to be at the center of the latest controversy as ESPN’s Baxter Holmes detailed. Holmes reported Paul complained to NBA commissioner Adam Silver back in November about former Lakers head coach Luke Walton.

In November, NBA commissioner Adam Silver and Maverick Carter, LeBron’s longtime business partner, met for lunch. James’ agent, Rich Paul, was seated at a nearby table, and at one point, approached Silver to complain about Walton, multiple sources familiar with the interaction told ESPN. Paul said he didn’t believe Walton was the right coach for the Lakers. Silver shrugged off the remark and asked whom Paul thought would be the right coach. Paul suggested Tyronn Lue.

Paul was also letting it be known through back-channel conversations, including those with reporters, that he wasn’t on board with Walton. Paul criticized how Walton allotted minutes to players and his inconsistent lineups, which were partly the result of injuries and suspensions. Members of the Lakers’ coaching staff became aware of those conversations and wondered whether Johnson’s heated meeting with Walton was influenced by Paul.

The article also detailed how Paul was seen at Lakers practices, and it was believed that he was scouting out Walton’s performance. One agent told ESPN that coaches feared “Rich is trying to get them fired.”

Given Klutch’s access, rival agents — even those representing players on the roster — said they were wary of allowing young clients to join the Lakers, fearing they’d be recruited or poached.

Klutch Sports represents one of the most unique agencies in sports. While LeBron James is technically only one of the athletes the agency represents, his ties with Klutch is greater than most players have with their representation. Klutch Sports was started by Paul, one of James’ closest friends. As The Ringer NBA Show podcast pointed out, if NBA draft prospect Darius Garland did receive a promise from a lottery team as had been reported, it is reasonable to think James is aware of which team made him the promise.

If it was not the Lakers, the information could quickly go from James to the L.A. front office. As Heavy reported earlier this month, Garland is an interesting draft target for the Lakers given he is represented by Klutch Sports and already has a relationship with James. Whether or not the concerns mentioned in the ESPN article are valid, it shows how much Klutch Sports is seen to be impacting the Lakers franchise.

Magic Johnson’s comments combined with the latest ESPN feature shows how much dysfunction is going on within the Lakers. We are a month away from the Lakers trying to woo a marquee free agent to play with James, and it is hard to imagine these details doing anything but hurting L.A.’s chances of having a successful offseason. 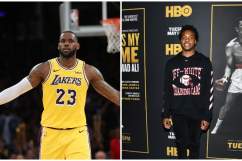