There has been a lot of changes for Nuggets center Nikola Jokic, but his girlfriend, Natalija Macesic, has been one of the constants in his life. Jokic and Macesic have been dating since they were both 16 years old, per The Gazette. The couple grew up in Serbia, but Macesic also came to America.

Macesic graduated from Metropolitan State with a psychology degree in 2018, per The Gazette. The college is right across the street from the Pepsi Center where the Nuggets play their home games in downtown Denver. It sounds like Macesic is a good student as she admitted to eying a Master’s degree.

Macesic prefers to stay out of the spotlight and has her Instagram set to private. Macesic’s profile features a photo of the couple. Jokic has become one of the best centers in the NBA, but the big man has not let stardom change him. The Denver Post noted he keeps life simple with his girlfriend, brothers and PlayStation.

He enjoys Denver’s mountains, weather and altitude air. He is constantly flanked by Nemanja and fellow older brother Strahinja, along with longtime girlfriend Natalija. Jokic packs his PlayStation on road trips. The only time he took part in the nightlife scene all of last season, according to Nemanja, was on New Year’s Eve — and only after the brothers put on some serious peer pressure.

Nuggets president of basketball operations Tim Connelly noted that Jokic’s attitude is a rarity. Even Connelly explained that Macesic is one of the few people in Jokic’s small circle.

“I’ve never seen a guy less enthused about a contract this big, and I say that in a positive sense,” Connelly explained to the Denver Post. “Everything is secondary to him to basketball and family. … Beyond that, he doesn’t care. He doesn’t like the spotlight. We have to talk him into doing a press conference. He just wants to play ball and help us win games and hang out with his girlfriend and his family.”

Jokic is trying to teach Macesic how to compete against his two older brothers, Nemanja and Strahinja. Jokic admitted to trying to get his girlfriend to cheat when playing cards against his family. Bleacher Report’s Howard Beck detailed the story.

“I don’t cheat,” interjects Natalija Macesic, his girlfriend and the brothers’ third roommate.

“I want her to cheat,” he says, because it’s the only way to beat Nemanja and Strahinja—who, according to Nikola, “are cheating all the time.”

Natalija sighs. “They don’t know how to lose.”

When Nuggets head coach Mike Malone came to Serbia to visit Jokic and his family, the brothers took him to a horse race to see Jokic’s horse, Dream Catcher, per Bleacher Report.

Nemanja, the middle Jokic brother, a former Division I basketball player and the most affable of the three, picked up Malone from the airport. Their first stop: a harness-racing track, to see Dream Catcher in action.

To that point, Nikola’s pride and joy had only managed a couple of second-place finishes. So it was a profoundly thrilling moment for everyone when Dream Catcher burst through the pack to win that night. 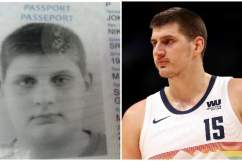