Getty DeAndre Hunter is likely headed to the Atlanta Hawks after the team traded up in the draft.

The Atlanta Hawks control a large part of the 2019 NBA draft with six picks inside the top 45 and three first rounders. It is no surprise that the Hawks are looking to consolidate these picks to move up in the draft. It will be interesting to see what picks Atlanta ends up keeping. Our mock draft makes predictions for each of their six picks, assuming they are to keep each pick.

ESPN reported that the Knicks rejected the Hawks offer to package their two top 10 picks to land the No. 3 selection. Atlanta also has interest in the No. 4 pick the Pelicans just acquired, per ESPN’s Jonathan Givony.

Regardless of what picks the Hawks end up with, there is plenty of good news in Atlanta. The Hawks have a number of bright young players include Trae Young and John Collins. With the amount of draft capital the Hawks possess, they also have the potential to add a couple legit difference makers in Thursday’s draft. We used my latest NBA mock draft to breakdown the Hawks selections. Be sure to check out our two-round NBA mock with predictions for every pick in Thursday’s draft.

Here is a look at my predictions for every Hawks pick.

While I have my doubts about Reddish, he is a perfect fit for the Hawks. Thanks to Young and Collins, Reddish does not have to come in and be the focal point of the offense. The question for Reddish has never been talent, but whether he has the mental makeup to be an alpha-type player you expect with a top-10 pick.

Even if Reddish never reaches the lofty expectations he had coming out of high school, the guard still gives Atlanta another shooter who can create his own shot. Reddish also has the potential to be a good NBA defender thanks to his length and athleticism.

A lot of mocks are projecting Jaxson Hayes here, but we have the Texas big man going one pick sooner to the Wizards at No. 9. I also think the Hawks can find another center that can run the floor and block shots a little later in the draft. Hachimura represents the best player available and has a lot of upside.

While the Hawks already have Collins, Hachimura has the ability to play both forward positions. Keep in mind, this is a player that got a late start to playing basketball. He did not speak English his first season at Gonzaga. There is still plenty of time for him to develop into a quality player and already possesses a solid offensive game.

Ideally, the Hawks want to use this pick as part of a package to move up in the draft. If they do end up keeping No. 17, they have a lot of options. There are several wings that could be available here as well, including Kentucky’s Keldon Johnson. Clarke gives the Hawks a forward who can come off the bench and fill some of Collins role when he needs a breather. Clarke is an athletic big man who runs the floor, blocks shots and has improved his outside jumper.

All Schofield did at Tennessee was produce and help the Vols have more success than the team did before he arrived. There are questions about what position he will play in the NBA, but the Tennessee forward does a little bit of everything. It is easy to see Schofield as a “glue guy” coming off the bench, but the Vols star has upside to be a little more than that in the right system.

With the Hawks moving Taurean Prince, Atlanta needs to add a forward or two that can help fill his role. King is an intriguing prospect and ideally would fill a “3-and-D” role if he proves to be a consistent shooter. King shot the college three-ball at a solid clip of 38.6 percent, and I love the Hawks adding an athletic wing at this point in the second round.

The Hawks have traded the No. 44 pick to the Heat for cash and a future pick. Gafford (and centers in general) could still be in play for the Hawks with one of their other picks.

With the Hawks opting not to use one of their top 10 picks on a big man, they will likely need to add a center later in the draft. Georgia’s Nic Claxton could be a player to watch for the Hawks at No. 17. With how things played out, Gafford is a nice pickup at No. 44 as the Arkansas center was once projected to be a lottery pick. Gafford hasn’t proved to be a shooter and offers the Hawks more of a traditional center. 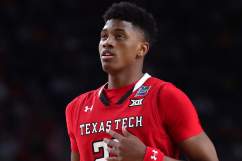 Read More
Atlanta Hawks, Basketball, NBA, NBA Draft
What picks do the Atlanta Hawks have in the 2019 NBA draft? We make predictions for all six of the Hawks picks in our Atlanta mock draft.