War of Will was one of the favorites heading into the 2019 Belmont Stakes.

Sir Winston has won the 2019 Belmont Stakes, while Tacitus came in second. The race is the final leg in what has been an underwhelming Triple Crown stretch. Sir Winston’s victory gave trainer Mark Casse his first Belmont Stakes win.

“They had to take him down,” trainer Mark Casse told The New York Times when asked about Churchill Downs. “A lot of people said the best horse won; you know, maybe he did. But we would have liked the chance.”

Country House has not raced since winning the Kentucky Derby as the horse has battled sickness since the victory. According to Horse Racing Nation, Country House is expected to return to race at Saratoga for the Travers Stakes.

Maximum Security was also absent from the Belmont as the team continues to fight the Kentucky Derby disqualification ruling. Officially, owner Gary West noted that the trainer believes the horse was not ready to run after the Derby.

“We are not looking at the Belmont because the trainer thinks he needs more time to recover from the Derby and, with us, the horse comes first,” West said, per Kentucky.com. “Maximum Security will tell us when he is ready to run.”

This left the Belmont field a bit shallow, but there were still a few solid horses in the race. War of Will and Tacitus were two of the favorites heading into the race. Trainer Todd Pletcher has a strong track record at the Belmont, but his two horses were considered longshots prior to the race.

Spinoff and Intrepid Heart were still given a chance by some given their ties to Pletcher. Pletcher admitted that he finds the Belmont to be one of the most significant races on the schedule.

Here is a look at the Belmont Stakes results and betting payouts, courtesy of NBC Sports.

Each horse’s post position is listed to the right of the horse’s name.

The following data is courtesy of NBC and is based on a $2 bet. 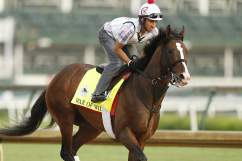 War of Will: Horse, Pedigree & Price