Getty Liverpool takes on Tottenham in the 2019 Champions League final.

The Champions League final is one of the few soccer matches that cannot end in a tie. Instead of the game ending in a draw, the match will head to extra time. If Tottenham and Liverpool remain tied at the end of 90 minutes plus stoppage time, the game will head to two 15-minute periods of extra time.

The Champions League final would head to penalty kicks if the two teams remain tied after extra time. Here is how UEFA describes the extra time rules for the final.

The final is played as one single match at a neutral and predetermined venue. If the score is equal at the end of normal playing time, two 15-minute periods of extra time are played. If one of the teams scores more goals than the other during extra time, that team is declared the winner. If the score is still equal after extra time, the winner is determined by kicks from the penalty mark

If the match goes into extra time, there is a five minute break after regulation. Teams typically have three substitutions but can use a fourth substitute during extra time.

These rules differ from the typical Champions League match where aggregate goals are used as the tiebreaker after the second leg is played between teams. Since the final consists of only one match, extra time is required to determine an outright winner.

There Is No Golden Goal Used in the Champions League Overtime

The Champions League does not use a golden goal format in extra time, meaning the full 30 minutes (two 15 minute halves) will be played even if a team scores a goal. This gives the trailing team an opportunity to level the score. UEFA did use a golden goal format for Champions League through 2002 before making the adjustment to the current format.

If the game remains tied after the extra time period, the match will head to penalty kicks. Teams alternate penalty kick attempts until the number reaches five. If the two teams are still tied after five penalty kicks, the attempts continue until one team has an advantage after an even number of attempts by both squads. Here are the penalty kick rules, per TheFA.com.

The ball must be stationary on the penalty mark.

The player taking the penalty kick must be clearly identified.

The defending goalkeeper must remain on the goal line, facing the kicker, between the goalposts until the ball has been kicked.

The player taking the penalty kick must kick the ball forward; backheeling is permitted provided the ball moves forward.

The ball is in play when it is kicked and clearly moves.

The kicker must not play the ball again until it has touched another player.

The penalty kick is completed when the ball stops moving, goes out of play or the referee stops play for any offence. 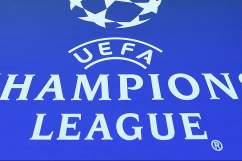 Champions League Overtime Rules: Can Games End in a Tie?