The Drake Curse is the notion that a team or athlete performs poorly based on their proximity to the rapper. Boxer Anthony Joshua is the latest alleged victim of the Drake curse. This has caused some to wonder whether Drake’s curse will impact the Raptors during the NBA finals. Prior to the fight, Johnson posted a photo with Drake flaunting how he was going to break the rapper’s curse.

Bout to break the curse ? #June1st

“Bout to break the curse ? #June1st,” Joshua posted on Instagram.

Instead, Andy Ruiz Jr. pulled off one of the biggest upsets against Joshua that we have seen in boxing this decade. Could Drake’s perceived unfortunate powers impact the NBA finals? If so, it would seem to impact both teams given Drake has Warriors tattoos and is friends with some of the Golden State players.

The rapper is a Community Ambassador for the Raptors and even wore Sixers shorts during Game 7 of the Toronto-Philadelphia playoff series in an attempt to counteract his own curse. Yes, this was the game that Kawhi Leonard hit the crazy buzzer-beater that touched all parts of the rim. Maybe Drake is on to something about his own negative superpower, and Joshua’s defeat does anything but put this notion to rest.

Drake’s curse has impacted both college and pro sports. It has spanned multiple teams and even those like Joshua who play an individual sport. According to Student Union Sports, the Miami Heat were the first team to show a tangible correlation with Drake.

The rapper celebrated with the team after it won the 2013 NBA title, and Miami ended up losing to San Antonio the next year in the NBA finals. LeBron James would end up leaving Miami to return to the Cavs. The curse then followed the rapper to Kentucky as Student Union Sports detailed.

2014 wasn’t exactly a great year for the famous rapper either. After giving the Kentucky Wildcats basketball team engraved rings two seasons before for winning a national championship, he tried to give the team a speech after their semifinal win in the Final Four. His speech was so inspiring that Shabazz Napier and UConn came out and upset the Wildcats to win the National Championship. Drake still actively hangs around the Kentucky basketball team , who have not won a championship since he gave them engraved rings in 2012.

The Alabama football team is one of the most recent victims to Drake’s spell. After the rapper was seen rocking a Crimson Tide hoodie, the team suffered their worst loss in the last decade under Nick Saban as Clemson destroyed them in the national title game. FanDuel lists the following teams and athletes as victims of Drake’s curse: Alabama football, Serena Williams, Andrew Wiggins, Johnny Manziel, Connor McGregor, Kentucky basketball, Golden State Warriors and Toronto Raptors.

Do the Warriors and Raptors both being listed mean Drake’s curse could finally be broken after the 2019 NBA finals. We will have to find out but in the meantime athletes may want to avoid getting close to Drake. 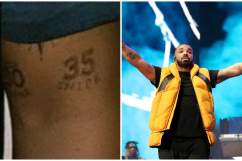