Getty Harry Kane pictured with girlfriend Katie Goodland at the MBE ceremony in 2019.

Harry Kane and girlfriend Katie Goodland are preparing for a summer wedding, per Hello Magazine. Goodland recently celebrated their upcoming wedding with a bachelorette party in Las Vegas.

Goodland posted a number of photos from the party including the one below of her wearing a “Mrs. Kane to Be” headband.

Goodland and her friends checked out DJ Calvin Harris while they were in Vegas. Goodland’s crew also received custom editions of Kane’s England jersey.

Kane’s fiancee called the party the “best weekend ever.”

“Every blonde needs seven brunette besties ??‍♀️?✨. Thank you to my girls for the best weekend ever. #laughter #love,” Goodland posted on Instagram.

According to the Daily Mail, Kane was seen exploring a London Victorian estate as a potential wedding venue. Kane proposed to Goodland during a Bahamas vacation in 2017.

Kane & Goodland Are the Proud Parents of 2 Kids: Vivienne & Ivy

Harry Kane and girlfriend Kate Goodland with their two daughters, Ivy and Vivienne.

Kane and Goodland are the proud parents of two daughters: Vivienne and Ivy. The couple welcomed Vivienne to the world in August of 2018. Kane spoke with Tottenham’s website about the impact fatherhood has had on him after Ivy was born.

The whole experience of being at the birth was quite surreal and one of the best feelings in the world, to become a dad. I wanted to be there for Kate and I’m so proud, especially proud of Kate, she was great, amazing. I don’t think you can really put it (the experience of being there at the birth) into words. It’s totally different from, say, scoring a goal and the adrenaline rush you get from that. It’s overwhelming really. It’s a miracle the way it all happens and to see a young human being coming into life was just incredible. It’s something that changes your life, and changes it for the better. I can’t wait to watch her grow up, she’s so small at the moment it’s crazy.

Harry Kane & his now fiancé Kate Goodall with David Beckham back in 2005 ?

A photo featuring Kane and Goodland on opposite sides of David Beckham recently went viral. According to Hello Magazine, Kane was just 11 years old in the photo. Kane and Goodland were childhood friends, and the Tottenham star spoke about the trust factor that comes with knowing someone for so long.

“If I was single now and meeting people, you’d never know if they were with you for the right reasons,” Kane said, per Hello Magazine. “Is it the money? You’d never really know. So I’m lucky that I’ve got a childhood sweetheart. She always wanted to do her own thing. She went to university and worked hard. I have a great family, they keep me grounded and they’ve worked just as hard as me to get me where I am.”

The couple recently celebrated Kane being awarded an MBE for his “services to football.” Goodland posted a photo from the big event, while Kane took to Twitter to show his appreciation.

“A real honour and an enormously proud day for me and my family.?A massive thanks to my @England teammates and coaching staff. ???,” Kane posted on Twitter.

A real honour and an enormously proud day for me and my family.?A massive thanks to my @England teammates and coaching staff. ??? pic.twitter.com/g70LWpRR1N 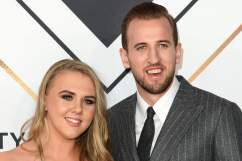