Quarterback Josh McCown retired from the NFL on Monday after 16 seasons in the league. But he didn’t stay out of work long, immediately joining ESPN as an analyst.

McCown made his TV debut on NFL Live Wednesday and immediately caused a stir among football observers and fans with his ranking of the league’s top wide receivers. What rankled viewers was where McCown ranked New England Patriots receiver Julian Edelman in his top five. 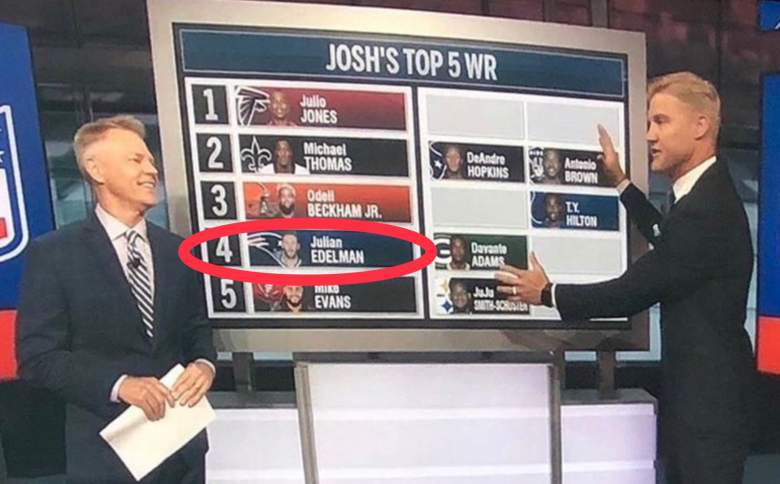 Screen Cap via RedditSure about that, Josh McCown?

Edelman as the NFL’s fourth-best receiver? Ahead of DeAndre Hopkins and Antonio Brown? Even devoted fans of Edelman and the Patriots might raise an eyebrow at that. But plenty of NFL followers objected to McCown’s ranking on social media.

Josh McCown put Julian Edelman on his top 5 and not @DeAndreHopkins? Lmao the disrespect pic.twitter.com/DEbgzONw70

This is a trash list by Josh McCown. Time for that pink slip at ESPN already…. pic.twitter.com/bn7CNqHkhB

This is so bad from Josh McCown that people thought it was photoshopped. I had to verify. Really Edelman over any of these guys is fireable offense ?. This is who they give media jobs to. pic.twitter.com/nNTJS1D2Oh

For context, consider where other outlets have Edelman on their lists of the top players in the league. CBS Sports’ Pete Prisco placed Edelman 13th among NFL wide receivers, ranking him No. 90 on his top 100. Pro Football Focus had six receivers on its top 50 players list and Edelman was not one of them. PFF even ranked 10 players who didn’t make the top 50, with four receivers on the list. Again, Edelman wasn’t among them.

Football Outsiders’ DYAR (Defense-adjusted Yards Above Replacement) metric ranked Edelman behind 34 other NFL receivers. (DYAR measures where receivers caught the ball, compared to an average player at the position, considers the situation and opponent in which the catches were made, and then translates those factors into yardage.) Under its DVOA (Defense-adjusted Value Over Average) metric, measuring value per play over an average receiver, Edelman places behind 40 receivers.

Among NFL receivers and tight ends, Edelman’s 74 receptions ranked No. 27. His 850 yards placed 28th. With six touchdowns, he tied for 24th. To be fair, Edelman missed four games due to a PED suspension and likely would’ve surpassed 100 catches and 1,000 yards had he played in all 16 games last season.

Yes, those are just numbers and player/position rankings are presumably based on more than pure statistics. In most cases, these lists are subjective. One might value big-play ability more than others. Another might try to quantify the degree of difficulty or toughness in a receiver’s game.

In McCown’s case, he may have been thinking like a quarterback who often faced pressure and didn’t have much time to throw. A receiver getting deep or winning a jump ball against a defender might not matter to a QB who doesn’t get time to let those patterns develop. Someone who can get open quickly, make a catch in traffic, show no fear of taking a hit over the middle, and fight for tough yards after the reception might be considered more valuable.

After all, McCown knows something about what it takes to play slot receiver in the NFL.

This isn’t trying to speak for McCown. He has to justify his own opinion and analysis, especially if he wants to be taken seriously in his new profession. We also live in a media culture in which the “hot take” gets the attention, so it’s certainly possible that McCown’s ESPN producers urged him to move the needle by causing some controversy. If so, they’re probably happy with the response his top five receivers list generated.