Klay Thompson is not the only athlete in his family as his parents, Mychal and Julie Thompson, had great careers as well. Klay’s dad, Mychal, played 13 NBA seasons and is now part of the Lakers broadcast team. Klay’s mom, Julie, was a stellar volleyball player at the University of Portland. Julie grew up in the Pacific Northwest, while Mychal was born in the Bahamas before moving to Florida.

The couple’s athletic genes were passed on to their children as Klay’s brothers, Trayce and Mychel, are also athletes. Trayce played in the MLB and currently plays for the Cleveland Indians minor league team in Columbus. Mychel spent six seasons playing pro basketball with the majority of his career in the G-League, per Bleacher Report.

“I guess when my dad met my mom and they were dating, he did say, ‘If we have kids, they probably will be professional athletes,’ because my mom was really athletic, too,” Klay’s brother Mychel explained to Bleacher Report. “My mom said before we were born she would stay up all night trying to beat my dad in pingpong and pool, because my dad was good, I guess, when he was younger, so my mom would always play until she could beat him.”

Klay’s Dad, Mychal, Is a Former No. 1 NBA Draft Pick Who Played for the Blazers, Spurs & Lakers

Klay learned what NBA life was like as his father spent more than a decade in the league. Mychal spent the majority of his career with the Blazers and Lakers. He averaged 13.7 points, 7.4 rebounds and 2.3 assists over his 13 seasons. Earlier in the 2019 NBA playoffs, Mychal offered a bit of a critique on the way the Warriors offense was playing.

“I think that’s the way the offense was set up,” Mychal noted, per Yahoo Sports. “Sometimes I get frustrated to see Klay just come down and stand on the sideline for 20 seconds, or for 18 seconds of the shot clock. I always think keep him out front so he can move, have more area to move — if anything as a decoy, as a threat, use his gravitational pull.

Klay Admits That the First Time He Beat His Mom, Julie, at Basketball Was When He Was 14 Years Old

Klay’s mother was a good all-around athlete who was also involved in gymnastics and track prior to focusing on volleyball. Apparently Julie’s skills on the basketball court were also solid. Klay admitted that he was not able to defeat his mom in a game of one-on-one until he turned 14 years old.

“I couldn’t beat her until I was 14 years old,” Klay explained to the San Francisco Chronicle. “That was a great moment for me. I remember it like yesterday. She wouldn’t give it to me, I had to earn it, and it took me 14 long years.” 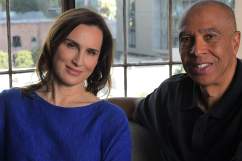