Getty LeBron James pictured at a Liverpool match back in 2011.

“YOU’LL NEVER WALK ALONE‼️‼️‼️‼️ #WEARELIVERPOOL❤️ CONGRATULATIONS MEN AND ANYONE THAT HAS ANY AFFILIATION WITH THE CLUB!! @LFC ?,” James tweeted.

James posted on social media throughout Liverpool’s match with Tottenham. The NBA star posted a video of one of Liverpool’s goals to his Instagram Story noting that he predicted the score. James also admitted to being a bit nervous with just a 1-0 lead earlier in the match.

“It has been a thrill to watch such a storied club make their way back to the top again and to be a part of it all,” Carter said, per Business Insider. “LeBron likes the fact that he’s diversified in another global sport.”

Liverpool are champions of Europe for the 6th time.

And LeBron LOVED it ? pic.twitter.com/M6QM8tqWtO

LeBron Purchased His Ownership Stake for $6.5 Million & Now It is Worth an Estimated $45 Million

In 2011, LeBron James got a 2% stake of Liverpool, which was valued at $6.5 million. If the team wins today, LeBron could easily sell that piece for $45 million. pic.twitter.com/qpsLuKaHHJ

According to Action Network’s Darren Rovell, James Liverpool ownership stake has gone up massively in value. James’ ownership of the team has increased more than seven times the amount he paid.

“In 2011, LeBron James got a 2% stake of Liverpool, which was valued at $6.5 million. If the team wins today, LeBron could easily sell that piece for $45 million,” Rovell tweeted.

This is a crucial offseason for the Lakers as they look to add another star to pair with James. The team also has the No. 4 pick in the 2019 NBA draft.

“I don’t think LeBron is in position to be too picky,” ESPN’s Brian Windhorst said, per The New York Post. “From what I understand he has already begun the recruiting process. I’ve heard he’s had contact with Kawhi Leonard. I’ve heard he’s had contact with Jimmy Butler. There is no tampering enforcement by players and while Magic Johnson, the guy who got in trouble for tampering before, is no longer there LeBron is tamperer-in-chief for the Lakers right now.”

“In terms of what’s different about LeBron James now versus then is players like that grow throughout their career,” Vogel said, per USA Today. “They develop a wisdom on the basketball court where everything is a little slower for them mentally than it is for everyone else who’s speeding up and frenetic, and you can see that with his game.” 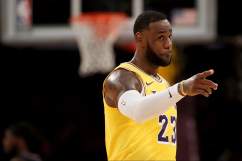 LeBron James Liverpool Stake: How Much Does the Lakers Star Own?