Getty Mallory Pugh is 21 years old and could be the future of the USWNT.

Mallory Pugh is 21 years old and celebrated her birthday on April 29th. Pugh has been pegged as the future of U.S. women’s soccer from a young age. The forward, who is originally from Littleton, Colorado, became the youngest American player to score a goal in the Olympics. Pugh already has quite the social media following with 352,000 Instagram followers.

“I think it was more I’m achieving things,” Pugh told Teen Vogue. “I knew I wanted to be a professional soccer player, but I never knew it would come at the age it did. I’m just taking it and rolling with it. The age part, it doesn’t matter to me. I achieved that, but I have so many other dreams and goals.”

Pugh briefly attended college at UCLA before opting to leave after a few months to pursue her pro soccer dreams. Pugh now plays in the NWSL for the Washington Spirit. ESPN detailed her decision to leave UCLA.

Before Pugh graduated from high school that year, there were rumors that she would renege on her commitment to UCLA to play instead for a French club, or head straight to the NWSL, which altered a rule to allow young U.S. national team players to enter the draft, seemingly designed to fast-track her into the league. But after delaying her enrollment so that she could compete in the U20 World Cup in Papua New Guinea, Pugh showed up at UCLA in January and did the things other players had always done. Took classes. Practiced. Went to frat parties. “There was a thought in my head,” she explains. “‘This is what other people do. Why do you think you’re different?'” But as time went by, she realized that after years of punching up like a boxer facing opponents twice her size, she wasn’t a normal college girl. A few months into the semester, she collapsed into bed one night and woke up convinced that it was time for her to leave.

bonjour France. we have arrived.

According to ESPN, Pugh is earning a six-figure salary thanks to her dual role as a USWNT member and Spirit player. Pugh believes her ascension up the soccer ranks has to do with her decision to leave comfort behind. 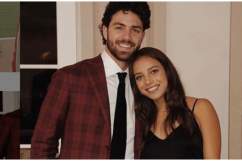