Getty Tacko Fall signed with the Boston Celtics as an undrafted free agent.

Introduced in the NBA’s most recent Collective Bargaining Agreement, Exhibit 10 contracts are one-year deals worth the minimum salary. They don’t come with any compensation protection, but can include an optional bonus ranging from $5K to $50K.

According to Basketball Insiders, the minimum NBA salary last season was $582,180 and this is likely about what Fall’s rookie salary would be if he makes the Celtics roster. The bonus for an Exhibit 10 contract acts as an incentive for the player to stay with the team, and it also allows the Celtics to keep Fall’s G-League rights if they choose to do so. Hoops Rumors detailed the Exhibit 10 bonus structure as well as how the deal could become a two-way contract.

Essentially, the Exhibit 10 bonus serves as an incentive for players to stick with their team’s G League affiliate — they must spend at least 60 days with the NBAGL club in order to get their bonus.

There’s another scenario in which that undrafted rookie who signs an Exhibit 10 deal with the Knicks would receive his $50K. Exhibit 10 contracts can be converted into two-way contracts, so if New York opted to do that before the season begins, the $50K bonus would turn into a salary guarantee for the player. As soon as his contract becomes a two-way deal, he’s entitled to that bonus, even if the Knicks waive him a week later.

Only teams with a G League affiliate can include an Exhibit 10 bonus in a contract.

Fall likely had a number of potential suitors but opted for the Celtics. With Al Horford likely heading out of town, the Celtics could be looking to add some depth at center, and Fall is a potential fit if he can perform well in Summer League.

Fall’s Biggest Weakness Is His Jumpshot and Free Throw Shooting

UCF head coach Johnny Dawkins has pointed to Boban Marjanovic as a potential example of Fall’s role in the NBA. Fall is a traditional big man who can block shots and gets his points in the low post. NBA bigs are now being asked to hit shots from the perimeter and this is not something Fall showed he could do at UCF.

Fall moves well for a big man that is 7’6″ and has good footwork. There is plenty to like about Fall’s game and the center held his own against No. 1 pick Zion Williamson in the NCAA tournament.

Fall’s ability to make the Celtics roster depends on two key factors. First, how well Fall performs this summer and his ability to adapt to NBA coaching. Secondly, how much runway the Celtics give Fall to prove he belongs in the NBA given his unique fit. 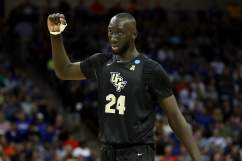 Read More
Basketball, Boston Celtics, NBA, NBA Draft
What team signed Tacko Fall? What is an Exhibit 10 contract? Learn more about Tacko signing with the Celtics and his salary with Boston as an undrafted player.