Getty Tacko Fall has a good chance to make the Boston Celtics roster.

Tacko Fall stands a good chance to make the Celtics final roster if Boston GM Danny Ainge’s recent comments are any indication. Ainge called Fall a “high priority” and the team waived Guerschon Yabusele which opens up a spot down low on the roster.

“We want to take his development very, very seriously,” Ainge explained to the Boston Globe. “He’s a high priority for us to try to really develop into a player…Tacko is fun to watch. He makes me laugh. Some of the plays he makes are hilarious, because you just don’t see them. Guards get in a bind and they just throw the ball up in the air, then Tacko grabs them and makes tip-toe dunks from under the basket. It’s just like a senior in high school playing against fourth graders sometimes out there. He’s a great kid. He’s working really hard.”

Fall went undrafted coming out of UCF but signed an Exhibit 10 contract with the Celtics. Fall turned heads at Summer League and not just because of his size. Here is a look at the projected Celtics roster and depth chart for the 2019-20 season.

The Celtics brought back Daniel Theis and Brad Wanamaker meaning the remaining roster spots are dwindling. With Fall’s stock rising, Vincent Poirier could be the odd man out. Boston likely needs to add either a true wing or another forward that could play both the three and four positions for depth purposes. Ainge doubled down on his Fall comments during a local radio interview, per Real GM’s Keith Smith.

“For everyone asking about Tacko Fall and the Celtics, Danny Ainge said this morning on @Toucherandrich: ‘We’re trying to still get a contract done with Tacko. We haven’t signed him yet. I really can’t say much more about Tacko than we’re just trying to get him in the fold,'” Smith tweeted.

Jayson Tatum May Have to Slide to Power Forward

Based on the current Celtics roster, Jayson Tatum may need to move to power forward to allow the Celtics to get their best players on the floor at the same time. Tatum has the size and frame to fit at the four better than either Jaylen Brown or Gordon Hayward. FanSided’s Justin Trombino points out why Tatum playing the four makes sense.

Assuming Tatum is going to average the same amount of minutes per game, he is going to have to be more of an efficient scorer. With Hayward returning and ready for a full-time work load, it’s looking like Tatum is going to be sliding into the four-spot and holding down the power forward position. It is going to require him to be more physical and force him to get under the basket. 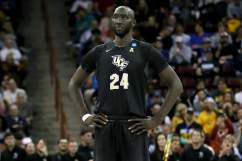 Tacko Fall Celtics: What Is an Exhibit 10 Contract?