Sammy Watkins catches a touchdown pass against the Denver Broncos.

Fantasy football season is well under way. Leagues have already been formed and dates for drafts have been set. With training camp getting set to kick off around the league, fantasy owners are beginning to build their draft sheets. The Kansas City Chiefs had one of the best offenses in the league last season which means that they will have many players drafted in fantasy.

The Chiefs averaged 425.6 yards per game in 2018 which led the NFL. They finished third in net passing yards per game with 309.7. Patrick Mahomes will be one of the first quarterbacks taken after an MVP season in 2018. Travis Kelce finished with 103 catches for 1,336 yards and 10 touchdowns. All three were second in the NFL among tight ends. Mahomes and Kelce will both be taken near the top of fantasy drafts, but where will the Kansas City receivers land? 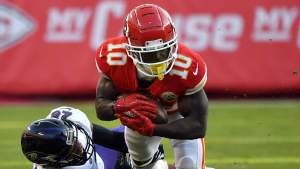 Hill finished as one of the top wide receivers in fantasy last season. He turned in his second straight 1,000 yard season in 2018, but he took the next step as an elite receiver. When thinking of the top fantasy receivers, Julio Jones, DeAndre Hopkins, and Antonio Brown come to mind. Hill has inserted his name into that conversation.

With Mahomes at quarterback, the Chiefs receivers will always be fantasy gold. Hill is at the top of that list. He is the clear cut No. 1 option on Kansas City. With the NFL deciding not to suspend Hill during the 2019 season, he can put all of the drama behind him and focus on football. Hill is projected as the sixth fantasy receiver according to ESPN. In a 12 team format, Hill should be viewed as a late first-round pick. 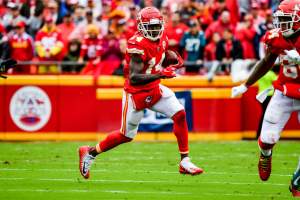 Watkins has been bit by the injury bug in his career. He has played all 16 games just once in his career, his rookie season. Last season, he played 10 games for the Chiefs, and that marked his third team in three seasons. Watkins finished with 40 catches for 519 yards and three touchdowns.

After being selected fourth overall by the Buffalo Bills in 2014, Watkins had two strong seasons right away. Many believe that he can return to form in 2019. Watkins is ranked as the 24th receiver in fantasy heading into the season. This has plenty to do with the Kansas City offensive scheme, but that is the change that he needed. ESPN projects Watkins to finish with 966 yards and six touchdowns this season. That is if he stays healthy. If Watkins can match that production, he will be a low end WR2 or flex option. 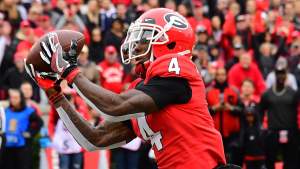 Hardman was selected in the second round of April’s draft out of Georgia. Hardman is a receiver that complements Hill. He is just 5’10, 187 pounds, but has exceptional speed and strength. Hardman ran a 4.33 40-yard dash at the combine and finished with 17 reps on the bench press.

At Georgia, Hardman struggled with drops and fumbles so he is not a finished product. He is currently ranked as the 74th fantasy wide receiver heading into the season. The Chiefs will not make Hardman a priority this season, especially with Hill not being suspended. He will have breakout moments in his rookie season, but over the course of 16 games, he will not put up big numbers. Hardman is a player to be stashed on your fantasy bench, if anything. 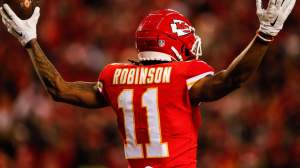 GettyDemarcus Robinson scores a touchdown in the third quarter against the Oakland Raiders.

Robinson scored four touchdowns last season for Kansas City. His production could grow this season. Robinson is expected to replace the recently departed Chris Conley. While he is not high on projection lists, Robinson can be used as a red zone threat. In your fantasy draft, do not waste a draft pick on Robinson. He will be available on the waiver wire. Like Hardman, he can be a player stashed on your bench for an occasional spot start.