New York Knicks fans were holding out some hope that the team could land Kawhi Leonard in NBA free agency after striking out on Kevin Durant. News of Julius Randle’s signing should have been the first indication that the Knicks were not in play for Leonard, but the team essentially confirmed this with a bevy of smaller signings on the first night of free agency.

Real GM’s Keith Smith reported the Knicks only have $12 million in cap space remaining which puts them out of the running to sign Leonard by a sizable margin. While the Knicks front office was reported to be in Los Angeles to meet with Randle, it does not appear that the Knicks even landed a meeting with Leonard. This is contrary to reports that the Knicks were planning on meeting with both Leonard and Durant when free agency started.

“When free agency starts the Knicks are expecting to have meetings with Kevin Durant and Kawhi Leonard before heading to Los Angeles to meet with what are considered second tier free agents. The countdown begins…,” Frank Isola tweeted before free agency started.

While we understand that some Knicks fans could be disappointed with tonight’s news we continue to be upbeat and confident in our plans to rebuild the Knicks to compete for championships in the future, through both the draft and targeted free agents.

It is not that Randle is a bad player, but it was the expectations heading into free agency that is impacting the perception of the Knicks’ moves. For months, the Knicks were mentioned as a potential destination for Kyrie Irving, Kemba Walker, Durant and Leonard among other All-Stars. The Knicks announcement that Randle had signed with New York was a clear indication that this free agency was not going to be the blockbuster hit fans were expecting.

After signing Randle, the Knicks also agreed to deals with Wayne Ellington, Reggie Bullock, Taj Gibson and Bobby Portis. ESPN’s Ramona Shelburne reported that the Knicks did not offer Durant a full max deal because of injury concerns.

“The Knicks and owner Jim Dolan were not prepared to offer Kevin Durant a full max contract due to concerns over his recovery from the Achilles injury, league sources tell me and @wojespn. Knicks officials are in Los Angeles tonight, meeting with free agents such as Julius Randle,” Shelburne tweeted.

ESPN reported that Leonard plans to meet with the Lakers and Clippers this week. The Knicks are nowhere to be found and now do not have the cap space to be in a position to make a run at Leonard. There had been rumors that DeMarcus Cousins could be a backup option for the Knicks, but New York just signed three big men to the roster.

From the NBA draft to free agency, the Knicks offseason has been defined by “plan B” as New York missed out on winning the lottery and landing Zion Williamson. Now, it appears the Knicks did not even get meetings with the top free agents. 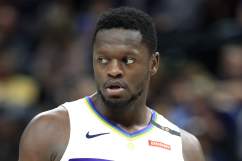 Read More
Basketball, NBA, New York Knicks
Kawhi Leonard no longer appears to be in play for the New York Knicks. Find out what went wrong and why the Knicks are running out of cap space.