Getty Kawhi Leonard has been talking with the Lakers since free agency began.

Those expecting Kawhi Leonard to make a free agent announcement on Twitter should not count on it. Leonard’s last tweet came on July 6, 2015 about a “custom swag board” decked out in the Klaw logo. It is one of four tweets ever from Leonard from his handle aptly named @KawhiLeonard.

Also, unless your name is Jamal Crawford, Leonard does not follow you. Leonard’s last activity on Twitter came on July 7, 2015, when he retweeted a photo posted by San Diego State’s facilities and operations account.

Leonard’s only other two tweets include President Barack Obama and playing at Top Golf.

One of Kawhi’s 6 Follows include Wingstop San Antonio

One of my greatest experiences pic.twitter.com/MiuGPv5Iin

Leonard only follows six Twitter accounts and one of these follows includes none other than Wingstop San Antonio which is sure to make Rick Ross smile. The only human Leonard follows is Jamal Crawford, which could make for a good recruiting addition by the Lakers. Leonard’s other four follows include Impact Sports, San Antonio Spurs, Jordan Brand and H-E-B grocery store.

Leonard does not have an Instagram account and prefers to stay off social media. That has not stopped people from speculating on whether Leonard will sign with the Lakers, Clippers or Raptors. Leonard has yet to announce where he is headed and there is no potential timeline on when his decision will be made.

Kawhi Was Unaware When His Laugh Went Viral

When Leonard’s famous laugh went viral, there is a good chance the superstar was unaware that it happened. Leonard explained to Sportsnet that he is not on social media, so he remains unaware of a lot of the discussion that goes on about him.

“I don’t really know what people were thinking because I don’t have social media and I don’t read what people say, but it’s not surprising,” Leonard told Sportsnet. “When you’re at this high caliber of player people tend to look at everything you do. It just comes with the territory.”

While Leonard does technically have a Twitter account, it is clear that he does not use it, and it would not be a surprise if it was one of his representatives that sent out the handful of tweets in 2015.

Leonard’s humor may not come across to fans and media members, but multiple teammates have described the all-star as funny. Raptors teamamte Kyle Lowry likened his sense of humor to actor Vince Vaughn.

“I’m a visual memory guy, so I can’t think of anything specific, but he’ll come up with some good laughs, good one-liners,” Bonner noted to Bleacher Report. “He is underhandedly really funny. He has one of the best smiles you’ve ever seen. It’s contagious.” 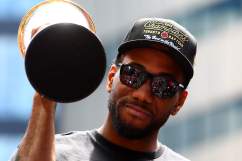