Patrick Mahomes’ girlfriend, Brittany Matthews, is doing her best to get the Chiefs quarterback an ESPY award. For the past several days, Matthews has been campaigning on Instagram for Mahomes by encouraging fans to vote.

Matthews reposted the following message to her Instagram story as part of her continuous campaign for her favorite NFL quarterback.

“An epic dance floor hype man, boyfriend to my best @brittanylynne8 and a pretty decent athlete…Y’all swipe up to vote for him,” the Instagram repost read.

Matthews has been posting messages to her Instagram Story throughout the week as she tried to get Mahomes a few final votes ahead of the ESPYS. Mahomes is nominated for two awards: Best NFL Player and Best Male Athlete. Mahomes is also part of a third nomination for Best Game for the Rams-Chiefs 2018 Monday Night Football matchup.

Mahomes is not the only athlete in the relationship as Matthews played college soccer at UT-Tyler and also had a brief professional stint in Iceland. Matthews is now a personal trainer and provided an overview of her background on her website.

The name is Brittany Lynne Matthews, I started my fitness journey 4 years ago while playing collegiate soccer! I graduated from University of Texas at Tyler with my Bachelors of Science in Kinesiology. I continued my soccer career professionally in Iceland. I have officially hung up my cleats and have focused on helping people with health and fitness. I love sharing my journey and knowledge with you along the way as I grow and learn!

The Couple Recently Celebrated Their 7th Anniversary Together

7 years, the greatest 7 years with you! Lots of life changes, lots of growing, lots of surprises, lots of memories! Cheers to a lifetime with you❤️ P.s- to everyone that’s gonna ask when we are getting married, the answer is whenever we want??

Matthews and Mahomes were high school sweethearts in Texas. The couple celebrated seven years of being together back in March, and Mahomes took to Instagram to celebrate the occasion.

Matthews posted a lengthy anniversary message also reinforcing they would get married “whenever they want.”

“7 years, the greatest 7 years with you! Lots of life changes, lots of growing, lots of surprises, lots of memories! Cheers to a lifetime with you❤️ P.s- to everyone that’s gonna ask when we are getting married, the answer is whenever we want??,” Matthews said on Instagram.

Over the offseason, Mahomes also celebrated being named as the cover athlete for Madden 20. Matthews added her congrats on Instagram and noted they were “running out of wall space” for all of Mahomes’ awards.

Matthews Is Attending the ESPYS With Mahomes

These three sure do keep me on my toes❤️ #myfamily #blessings

Matthews is part of a party of three at the 2019 ESPYS. Mahomes is fulfilling an earlier promise to his mother, Randi Martin, that he would take her to the ESPYS if he was ever invited. Both Matthews and Martin will be joining the Chiefs quarterback in Los Angeles.

“I got my girlfriend who is here with me right now somewhere backstage, and then I have my mom is coming with me, too,” Mahomes said on Jimmy Kimmel Live, via The Kansas City Star. “When I was in college, she said if I make the ESPYs or I if I get to go there, she wants to be my date.” 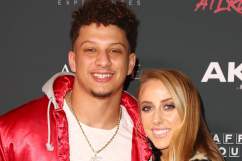 Patrick Mahomes’ Girlfriend, Brittany Matthews, on Marriage: ‘Whenever We Want’