Shane Lowry and his wife, Wendy Lowry, opted to avoid a big wedding in their home country of Ireland. The couple got married in New York City after the 2016 Masters, per The Independent. Wendy prefers to stay out of the spotlight so the idea of a big wedding became stressful.

“The guest list [was spiraling] and I get stressed very easily, so we decided the big white wedding at home was not what we wanted,” Shane told The Independent.

Shane detailed why the couple opted to come to the United States for the wedding. The golfer emphasized that the atmosphere was “chilled” much to the delight of the couple.

“Anyone who knows Wendy knows that she doesn’t like the limelight or anything like that,” Shane noted to The Independent. “…It was really all very chilled. We woke up the next morning and were totally happy at what we were after doing. It was perfect for the two of us.”

Shane and Wendy met on a “random night out” according to the golfer.

“I met he on a random night out,” Shane said, per The Independent. “Nobody introduced us or anything and no, it wasn’t in Coppers.

Shane & Wendy Are the Proud Parents of a Two-Year-Old Daughter, Iris

The couple is now the proud parents of a two-year-old daughter, Iris. Shane found himself leading the field heading into the final round of The Open Championship but noted his daughter would be there to give him a hug regardless of the outcome.

“No matter what I shoot tomorrow, my two-year-old will be there waiting for me,” Lowry noted to The Independent.

Shane admits that being a father makes the outcome of tournaments a little less important, but he also noted that his daughter appears to be helping his golf game.

“I don’t know what it is. Maybe when you have a child, it makes a difference,” Shane explained to The Independent in 2017. “It is probably no coincidence that since Iris was born, my golf has been quite good. It puts life into perspective.”

As for The Open Championship, Shane appeared confident that he could win his first major heading into the final round of the tournament.

“I’m hoping I feel that comfortable out there tomorrow,” Shane told The 42. “I know it’s going to be a tough 24 hours ahead of me, but you know what, there’s nowhere I’d rather be – a four-shot lead in an Open Championship in Ireland…Tomorrow’s going to be incredible, regardless of what happens. I felt so in control of my game. There are very few times in golf when you get into that position and it’s just great when it happens.”

Wendy Ran a Marathon to Raise More Than $20,000 for a Local Children’s Hospital

Not as fresh this morning ?

Wendy is a nurse by trade, and the couple is consistently trying to give back to the community. Wendy trained for a marathon in 2018 and helped raise more than $20,000 for a local children’s hospital. Wendy detailed the cause on a fundraising page she created on EverydayHero.com.

I’ve created this page because I want to make a difference. Having trained as a Paediatric nurse in Temple Street Children’s University Hospital I wanted to support them by raising money as part of my participation in SSE Airtricity Dublin Marathon 2018. Please help me help them by giving whatever you can using the ‘Give Now’ button. 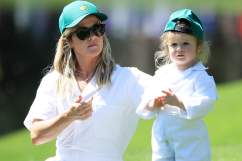