Getty Baker Mayfield #6 of the Cleveland Browns before the start of the preseason game against the Indianapolis Colts at Lucas Oil Stadium on August 17, 2019 in Indianapolis, Indiana.

Cleveland will start and play Baker Mayfield and much of the first team in the third preseason game Friday night against the Bucs. Browns head coach Freddie Kitchens confirmed the news to Cleveland.com, but didn’t say how many possessions his star quarterback would see in Tampa.

“We’re going to play our guys some,” Kitchens said, “and I don’t know how long yet.”

Mayfield sat last Saturday against the Colts in a 21-18 victory. He was replaced by backup Garrett Gilbert, who completed 13-of-19 passes for 151 yards and two touchdowns in a half of action. This was continued growth for the 28-year-old journeyman, who connected on 14-of-22 throws for 135 yards in a 30-10 triumph over Washington in the preseason opener. 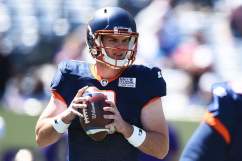 Mayfield looked crisp against the Redskins in his only appearance, so far. He led a touchdown drive on 5-for-6 passing for 77 yards. The drive culminated in a 24-yard strike to Rashard Higgins.

He has expressed a desire to play “at least a half” against Tampa Bay.

“I would like to say at least a half, but it’s not my call,” Mayfield told WKYC after Wednesday’s practice.

“I think that third game, a lot of the time is treated, as the last warmup before the real thing starts because none of the starters play in the fourth game, just because it so close to the real one. It’s a final tune-up, iron everything out, treat it more like a game week with the mental prep work of getting into a routine, so yeah, I’m looking forward to playing.”

It’s ultimately Kitchens call, but he knows that since he will sit his starters next week versus the Lions,  this is the last opportunity for live reps until the regular season starts on Sep. 8.

He said playing time for the rest of his starters will be determined on a player-by-player basis.

“Some of it factors in on how guys are feeling,” he said. “Little nicks and bumps that they may have because they’ve all got nicks and bumps. We’ve had a physical camp.”

This likely holds out star receiver Odell Beckham, Jr., who has been limited in training camp since he injured his hip in early August.

In just 13 starts last season, Mayfield broke the rookie record for touchdown passes with 27. The 2018 Heisman winner out of Oklahoma totaled 3,725 passing yards and guided the Browns to a 7-8-1 finish, winning five of their final seven games.

Our own J.R. DeGroote expects bigger numbers this fall, which would necessitate an early to mid-round selection in fantasy football.

Head coach Freddie Kitchens — who will call the plays — and offensive coordinator Todd Monken both have a habit of wanting to go downfield, which will help Mayfield rack up the points.

Mayfield should be considered as an elite QB prospect and should be one of the first six passers off the board. Take Mayfield in the 5th to 6th round of 12-team, point-per-reception leagues.

CBS Sports is even more excited about him, projecting him as the next Patrick Mahomes “without paying full price.” They point out that Mayfield was on a 4,300-yard, 33-touchdown pace as a starter in 2018, and even better once Kitchens took over midseason (4,508 yards, 38 touchdowns).

Read More
Cleveland Browns, NFL, Tampa Bay Buccaneers
Baker Mayfield wants to play at least a half against the Bucs Friday night, but head coach Freddie Kitchens may limit him to only a few possessions.