After the Chicago Bears dropped their first preseason game to Carolina, 23-13, the team’s depth chart didn’t change at all the following week. That may not be the case after the Bears play the Giants at MetLife Stadium Friday.

With several position battles still up in the air, and several talented young athletes vying for the same roster spot, things could get interesting over the next three preseason games. The Bears have the deepest roster they’ve had in years–which could make their decisions here integral to their success moving forward. Here are five key position battles to watch during the Bears next preseason game against the Giants: 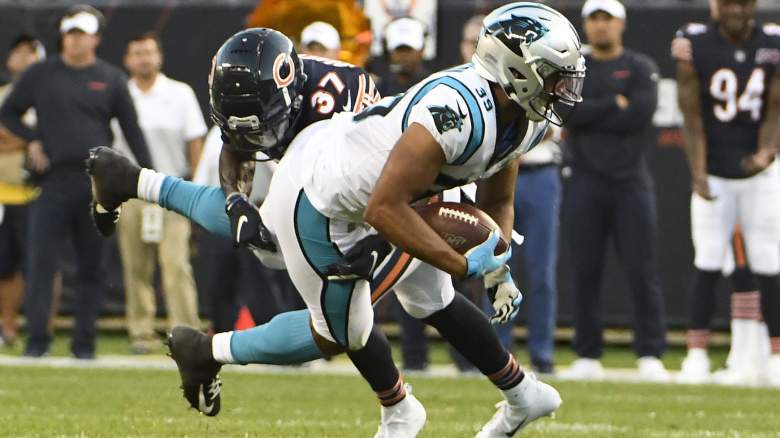 GettyJohn Franklin #37 of the Chicago Bears makes a play in the Bears first preseason game against Carolina. (Photo by David Banks/Getty Images)

This is arguably the Bears’ most intriguing position battle to watch so far this preseason because they are loaded with talent at cornerback. A few undrafted free agents have made their respective marks this preseason, including Clifton Duck and Last Chance U’s John Franklin III. There’s also this year’s sixth-round pick Duke Shelley, who has impressed so far this camp.

And don’t forget about Kevin Tolliver II, who was on the team last season. Tolliver is going to have to battle for a spot against Shelley, Duck, and Franklin III, and only three of those four can possibly make the roster. There’s also UDFA Michael Joseph and 2019 seventh-round pick Stephen Denmark. Joseph has had few flashes in camp, but Denmark has been saddled with injuries, and neither looks to be better than their rivals at the position. It should be interesting to watch this battle play out, especially against Daniel Jones. 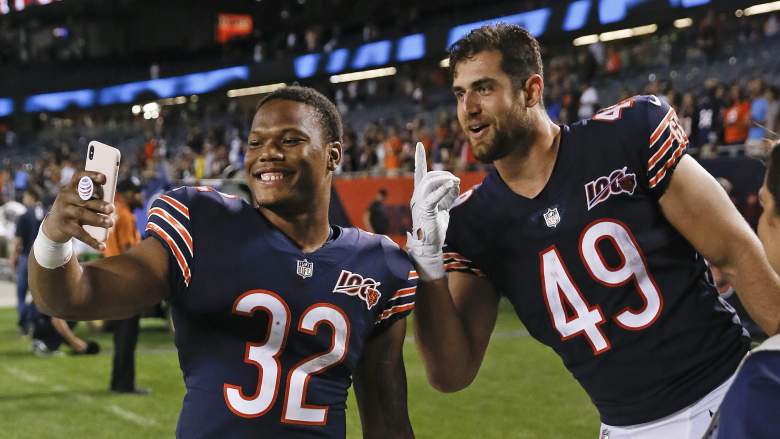 GettyCHICAGO, ILLINOIS – AUGUST 08: David Montgomery #32 of the Chicago Bears and Ian Bunting #49 at the end of their team’s preseason game against the Carolina Panthers at Soldier Field on August 08, 2019 in Chicago, Illinois. (Photo by Nuccio DiNuzzo/Getty Images)

The primary question here is: can Ian Bunting build off his momentum and continue to make an impression? Bunting had a few bad plays in his debut against Carolina: he had two false start penalties and a fumble that was “Peanut Punched” out of his hands. Many initially also blamed Bunting for a whiff of a block that resulted in a sack of backup Chase Daniel, but Matt Nagy has subsequently blamed Daniel for the end result of the play.

But Bunting also led the team in receiving against Carolina, including a nice 45-yarder from Daniel. If he continues this type of play against the Giants, the Bears may choose to go with five tight ends, just to avoid him getting scooped up off their practice squad. 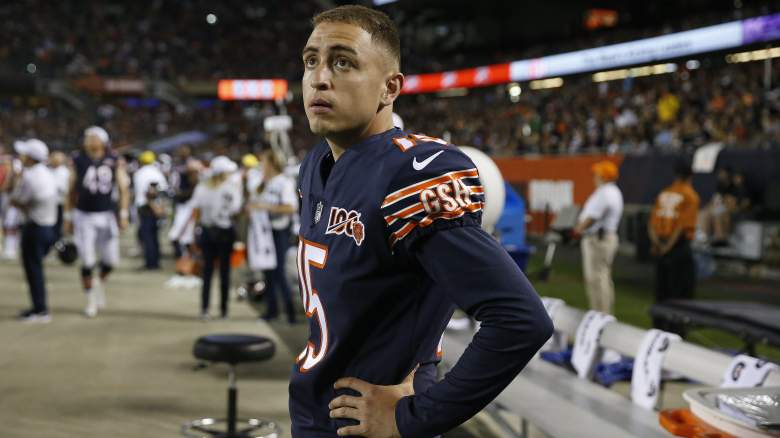 Bears fans and the team’s beat writers aren’t just going to be watching Eddy Piñeiro and Elliott Fry during the second preseason game. They’re going to be watching Carolina kicker Joey Slye and probably Indianapolis backup Cole Hedlund and just about any other kickers around the league who are making more kicks than Fry or Piñeiro, who are both looking less than stellar so far.

The Chicago Tribune reported that Ryan Pace was in talks with the Ravens to trade for kicker Kaare Vedvik, but the Bears were beat out in negotiations for Vedvik by the Vikings–which may have been a good thing. Look for the Bears to aggressively go after the most accurate kicker available –regardless of who he’s playing for. 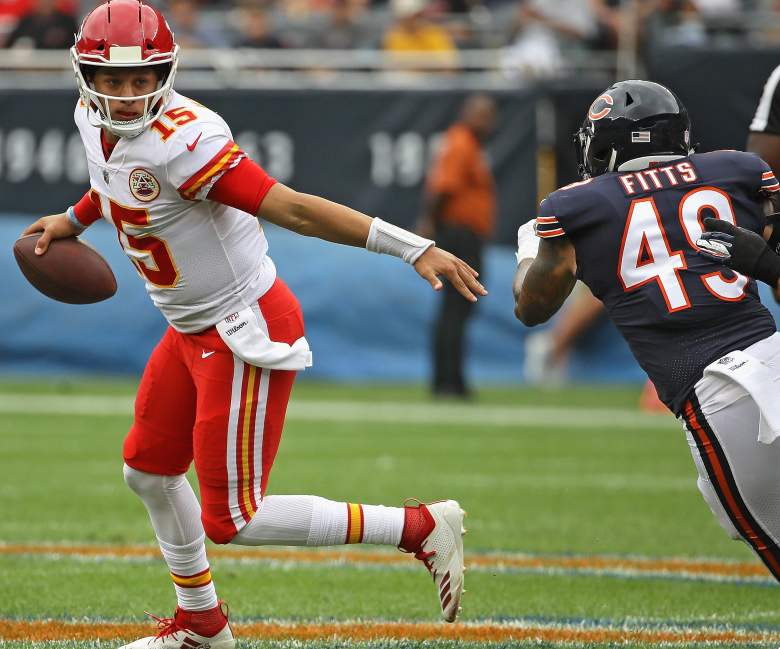 With the top three in this position group being Khalil Mack, Leonard Floyd, and Aaron Lynch, the starters are obvious locks. Isiah Irving is likely to fill the fourth and final spot on the roster, but he’s no guarantee, and this is where it gets interesting.

Kylie Fitts and Canadian football star Mathieu Betts are his most likely competition–Chuck Harris and James Vaughters haven’t made an impression yet, and are unlikely to at this point. Fitts had a bad first game against Carolina, and if Betts can make an impression, he has a shot at challenging Irving. The ways in which Betts, Irving, and Fitts react over the next three games will be critical. 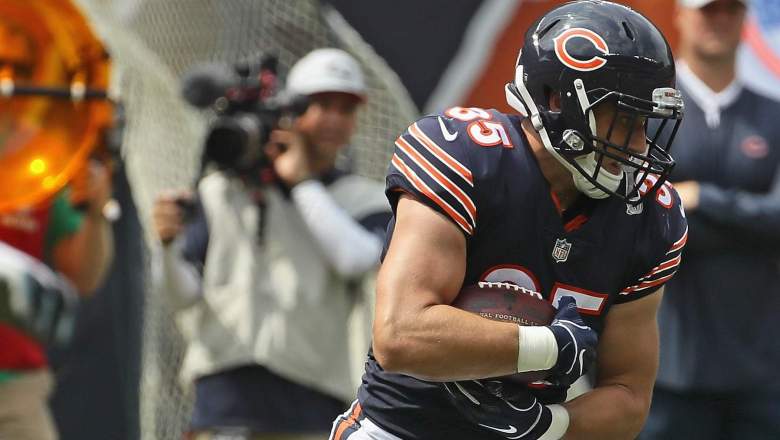 Basically, this is a battle between Ryan Nall and Kerrith Whyte Jr., and it should be a fun one to watch. The Bears drafted Whyte in the seventh round this preseason, while Nall went undrafted, and had a decent preseason in 2018 and was later signed to the Bears’ practice squad. Whyte outperformed Nall in the first preseason game last Friday against Carolina, however, and many Bears fans are curious to see what Whyte all brings to the table.

There’s still a chance Nall could surge, though, because he has shown explosiveness while playing with the Bears in the past. If he can have a few explosive runs while continuing to make a difference on special teams, he has a shot at beating Whyte out for the final running back spot on the roster.

READ NEXT: Bears Practice Fights: What’s Up With Kyle Long?