Getty EAST RUTHERFORD, NEW JERSEY - AUGUST 16: Clifton Duck #38 of the Chicago Bears returns an interception against the New York Giants in the second half during a preseason game at MetLife Stadium on August 16, 2019 in East Rutherford, New Jersey. (Photo by Steven Ryan/Getty Images)

For their second preseason contest against the New York Giants, Matt Nagy decided to keep the core 26 starters of the Chicago Bears on the bench. This gave his second and third-string players increased opportunities to prove themselves, and several took advantage of the extra playing time.

While it’s true that in many ways, the preseason doesn’t count, it certainly can make or break the careers of young players. Several Bears greats including Jay Hilgenberg and Tom Waddle came into the league undrafted. While it remains to be seen whether any of the current group of young players will attain that type of career longevity, several Bears looking to secure spots on the roster made strong cases for themselves against the Giants. 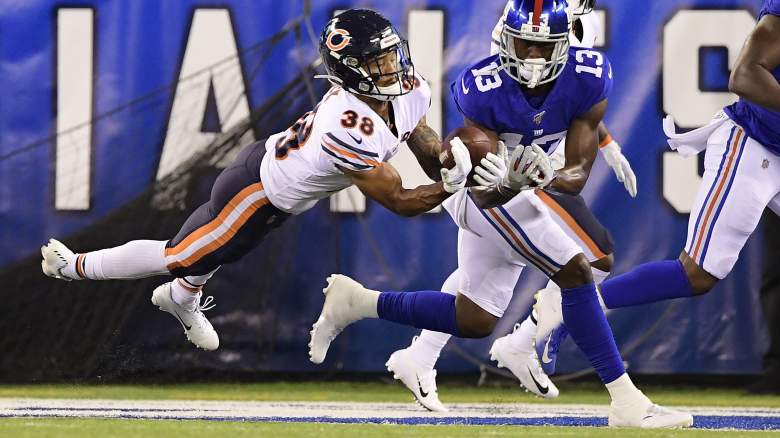 GettyEAST RUTHERFORD, NEW JERSEY – AUGUST 16: Clifton Duck #38 of the Chicago Bears intercepts the ball away from Reggie Jr. White #13 of the New York Giants in the second half during a preseason game at MetLife Stadium on August 16, 2019 in East Rutherford, New Jersey. (Photo by Steven Ryan/Getty Images)

The undrafted free agent out of Appalachian State had the most exciting play of the game for the Bears when he made a diving interception at the goal line and returned it 62 yards. The driving Giants were threatening to score when Duck read the play and made a nice break on the ball.

Bears ball from the Giants 37. pic.twitter.com/1g9e11FTaJ

Duck has made a name for himself trying out for the Bears this preseason, and he seems to have excellent play-making abilities.

Clifton duck interception. He has had a few of them this camp. #bears

He also plays with a great deal of grit and determination. Duck is a bit undersized at 5-foot-9 and 176 pounds, but he has a few words for his doubters: 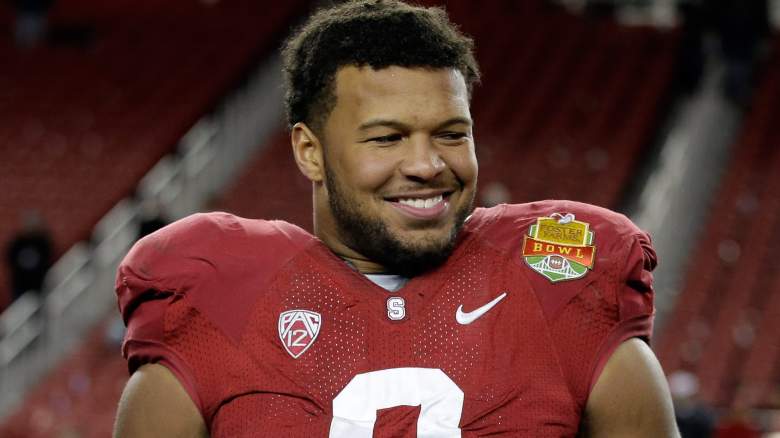 GettySANTA CLARA, CA – DECEMBER 30: James Vaughters #9 of the Stanford Cardinal is awarded the defensive MVP after they defeated the Maryland Terrapins in the Foster Farms Bowl at Levi’s Stadium on December 30, 2014 in Santa Clara, California. (Photo by Ezra Shaw/Getty Images)

After Vaughters seemed to fade into the background at the linebacker position over the past month, he reemerged in a big way Friday night. In the second quarter, he swatted the ball out of the hand of Giants quarterback Daniel Jones and promptly recovered the fumble he just forced.

James Vaughters will do it all himself ?

He gets the strip, the sack, and the recovery for the @ChicagoBears!

Vaughters also had a sack in the game, capping a solid overall performance. He is still a long shot to make the roster, but if he keeps making huge plays like he did against New York, his stock should rise. 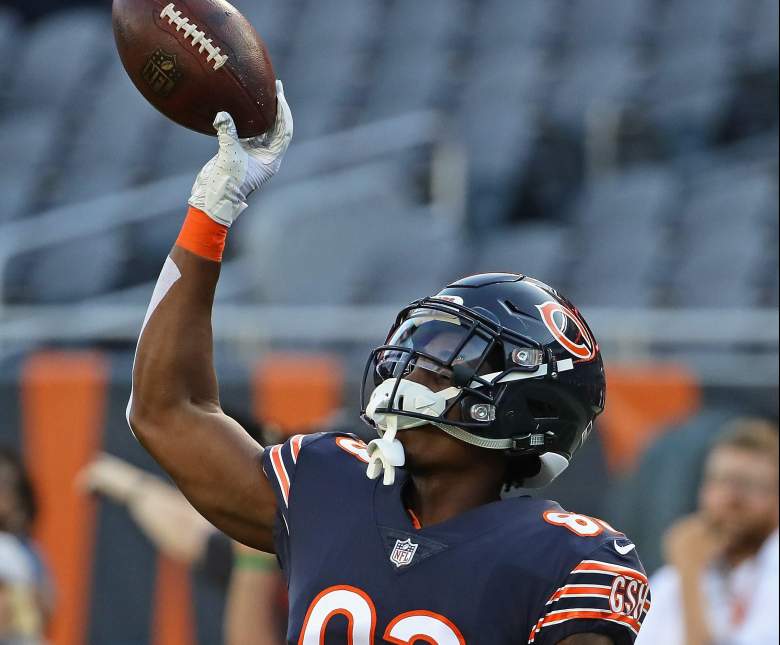 GettyJavon Wims, Wide Receiver for the Chicago Bears, has had an excellent preseason. (Photo by Getty Images)

Yes, Wims was on Bears fans’ radar after being one of the breakout stars during the 2018 preseason, and in his sophomore season, Wims continues to impress. In the Bears’ second game against the Giants, Wims led the team in receiving with five catches for 64 yards, highlighted by an athletic 29-yard grab that fully displayed why many fans are so high on him.

Wims has been garnering a great deal of buzz this season and has impressed many who have seen him repeatedly make athletic catches. He seems like a roster lock, yet he still keeps giving it his all, which says a lot about who he is. 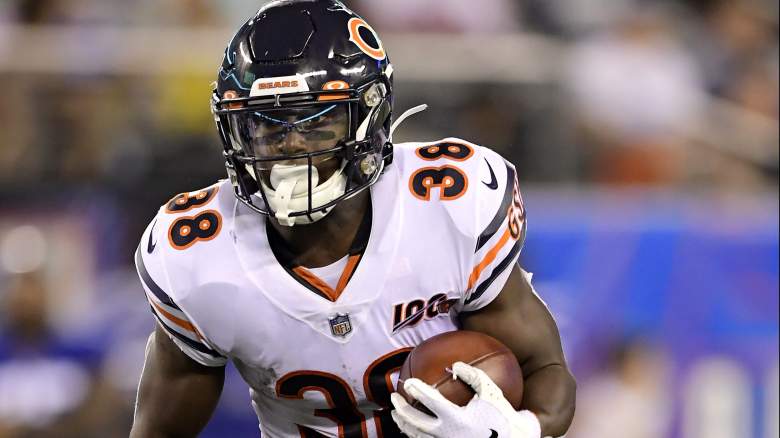 GettyEAST RUTHERFORD, NEW JERSEY – AUGUST 16: Kerrith Whyte #38 of the Chicago Bears carries the ball against the New York Giants in the second half during a preseason game at MetLife Stadium on August 16, 2019 in East Rutherford, New Jersey. (Photo by Steven Ryan/Getty Images)

Whyte’s biggest play of the game was called back due to a penalty. Late in the second quarter, Whyte ran a kickoff 103 yards for a touchdown. It was a dynamic play that showcased Whyte’s speed and skill, and it may have secured him a roster spot simply due to what he could bring to the return game.

Whyte also scored the team’s only touchdown, and showed flashes in the running game for the second week in a row–and many spectators took notice. His coach noticed, too. “Kerrith Whyte I thought really did a lot of good things tonight,” Nagy said during his post-game press conference. If Whyte continues to impress, he’s likely to beat out rival running back Ryan Nall for the coveted fourth slot on the depth chart. 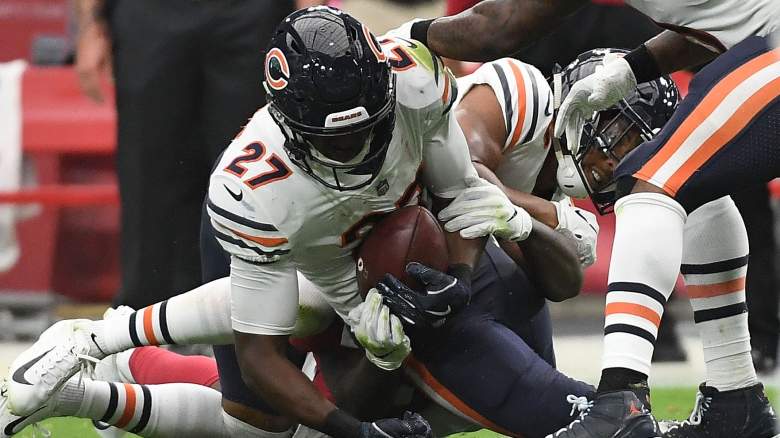 A favorite of Bears’ fans, this longest-tenured Bear has fallen a bit lower on the depth charts this season, but he had a solid game against the Giants. McManis had a forced fumble courtesy of a perfectly executed “Peanut Punch,” a skill he is better at than many realize.

McManis has also had a solid camp playing safety–and it’s his first year playing the position. If he continues to prove himself to be a turnover machine while still making invaluable contributions to special teams, McManis has a chance to remain on the 53-man roster.

READ NEXT: Chicago Bears: 5 Storylines That Emerged Against the Giants