Getty Ben Roethlisberger #7 of the Pittsburgh Steelers calls a play at the line of scrimmage against the Tennessee Titans during week three of preseason at Nissan Stadium on August 25, 2019 in Nashville, Tennessee.

Ben Roethlisberger is coming off the best statistical season of his career. He threw for 5,129 yards, 34 touchdowns and 16 interceptions as Pittsburgh failed to make the playoffs at 9-6-1.

However, he no longer has star receiver Antonio Brown, who has brought his enigmatic ways to the Raiders after a trade this offseason. Without his favorite target from the last few seasons, the question now is whether the Steelers quarterback can even approach his numbers from the last decade.

The answer will determine his vitability in fantasy football in the years to come before he retires. It’ll be hard to replace Brown’s 11,207 yards and 74 scores since 2010, though JuJu Smith-Schuster will have something to say about that (111 catches for 1,426 yards and seven touchdowns last fall).

Before Roethlisberger and Brown were an item, the signal-caller eclipsed 4,000 yards just once. After? Five times. As Action Network points out, his numbers have plummeted when Brown had to sit.

The team success is good, but Big Ben hasn’t demonstrated much upside without his No. 1 sidekick in this minute sample size:

With that said, there’s a wide array of opinions on where you should draft the 6-foot-5, 240-pounder in fantasy. Here’s the rundown.

Starting with the bad news, CBS Sports doubts that he can continue his gaudy production without one of his key weapons from the last few seasons.

Last year saw him generate a pair of 40-point plus outings against the Chiefs and Panthers, as well as two other 30-point plus ones. While the sheer amount of yards and touchdowns may diminish, The Athletic notes that the interceptions should fall, as well.

Brown was targeted 168 times and caught 104 passes, 15 of which went for touchdowns, but there was a lot of bad that came out of it as well.

The article also mentions an extra emphasis on patience with the ball and not locking eyes with just one receiver. Lastly, Bleacher Report says you should avoid Roethlisberger, since Donte Moncrief will not be able to replicate Brown’s production.

Donte Moncrief played four campaigns with Indianapolis Colts and suited up for the Jacksonville Jaguars last year; he has one 50-catch season.

In short, Roethlisberger should be a late-round selection. In fact, play it safe and avoid drafting him. Due to a volume increase in targets and receptions, it would be wise to take Smith-Schuster, instead. 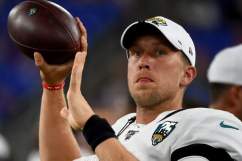