Kyler Murray looked polish in his first NFL action last week, going 6-for-7 for 44 yards in a 17-13 victory over the Los Angeles Chargers. The Cardinals rookie quarterback regressed in his followup preseason start Thursday night versus the visiting Oakland Raiders.

The 5-foot-10 Murray completed just three of his eight passes for 12 yards, adding a four-yard rush in the process.  He was also sacked twice, including once for a safety. This lack of production contributed to Arizona falling into a 26-0 hole in the first half.

He eventually gave way to backup Brett Hundley after four drives. The former UCLA star performed the best in the preseason opener versus the Chargers, connecting on 10-of-14 throws for 104 yards and a touchdown. 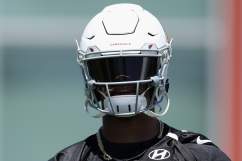 Kyler Murray Fantasy: When Should You Draft the Cardinals QB?

Murray got just about the amount of work expected from first-year head coach Kliff Kingsbury.

“I don’t know how much more,” he said to Cardinals Wire when asked about how many drives Murray would see. “We’ll see how the game is going, but definitely more than one drive.”

This year’s No. 1 pick is a far cry from his statistical output for Oklahoma last fall. The dual-threat 4,361 passing yards, 42 touchdowns and just seven interceptions to go with 1,001 rushing yards and 12 scores. This gaudy production led to the Heisman Trophy last December.

Kingsbury also made a statement by drafting Murray, as the Cardinals previously selected Josh Rosen in the first round of the 2018 NFL Draft. Arizona shipped Rosen to Miami to make room for Murray in Kingsbury’s spread scheme.

Murray is just in the second game of his career in the preseason, as Kingsbury is preparing him for Week One against the Lions.

For his competent single series against Los Angeles, Pro Football Focus awarded Murray an 82.9 score. This score is the system’s equivalent of a solid NFL starter, which bodes well for the rookie.

All seven of his pass attempts were on throws shorter than nine yards downfield, but while there was nothing to really wow you outside of his nice work to get away from pressure on the previously mentioned play, it was a composed first outing for the number one overall pick.

This solid outing boosted Murray into the early odds-on favorite to win Offensive Rookie of the Year honors. Fanduel and Sports Betting Dime are picking him to be the first quarterback to take home the honors since Dak Prescott in 2013 for the Cowboys.

Omar Soussi of Forbes points out that the fact that Murray should start from the first snap of the regular season puts him at an advantage over his peers. The Redskins’ Dwayne Haskins is staring down the third string, while the Giants’ Daniel Jones is battling Eli Manning for the starting gig.

One of the key advantages for Murray is simply the fact that he’s one of the few offensive rookies looking to start week one. Most of the top picks haven’t been named starters yet and in a draft filled with so much defensive talent, the offensive side isn’t as deep as usual. The more games Murray plays over his competition, the better he’ll look. He’s also the biggest offensive star from the draft and that will greatly benefit his chances of leading the race.

Murray needs to work through the growing pains of starting early in order to get close to the award. His predecessor in Rosen was thrown to the wolves last season, leading to a dreadful 11 touchdown to 14 interception ratio.

It also remains to be seen if Kingsbury’s approach will succeed in the NFL. While his Texas Tech offenses were spectacular at times, his teams only posted a 35-40 record during his tenure. 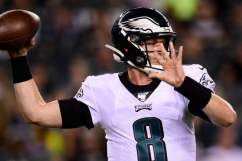 Read More
Arizona Cardinals, Las Vegas Raiders, NFL
Kyler Murray regressed in his second preseason start, failing to produce any points in the first half against the Raiders. Here are his stats.