Getty Melvin Gordon #28 of the Los Angeles Chargers loses the ball on the 1 yard line against the Baltimore Ravens during the fourth quarter in the AFC Wild Card Playoff game at M&T Bank Stadium on January 06, 2019 in Baltimore, Maryland.

Melvin Gordon’s contract holdout is expected to last into the season, reports Ian Rapoport of the NFL Network. “Contract talks have not progressed as he hoped, and (Gordon will) continue to train in Florida for the foreseeable future,” he tweeted.

“Just waiting on the call,” the running back told ESPN’s Jeremy Fowler Monday. Rapoport reported earlier this month that Gordon wants more than the $10 million per year that the Chargers offered.

The Los Angeles ownership has stood firm, insisting they won’t go higher for a running back. According to CBS Sports at the beginning of the month, the Chargers haven’t come anywhere close to matching it thus far.

Damarius Bilbo, one of Gordon’s other agents, told NFL.com this week that Gordon has felt “disrespected” by the Chargers’ offers.
“If we’d gotten a respectable offer, we wouldn’t be here,” Bilbo said. “But he felt disrespected. He’s very serious.”
Gordon is coming off a highly efficient season where he ranked fifth in the NFL in total touchdowns with 14, despite missing four games. Gordon, who finished the season 885 rushing yards, averaged 5.1 yards per carry in 2018, which was more than any of the NFL’s top three leaders in rushing yards: Ezekiel Elliott (4.7), Saquon Barkley (5.0) and Todd Gurley (4.9).

“I know my value,” Gordon said in June. “I know what I bring to this team, and I’m sticking with that. Todd (Gurley)’s paid, so Todd don’t care what anybody says right now — him or David Johnson — they can say what they want to say. They signed the dotted line. But unfortunately I haven’t yet, so I’ve got to take the heat for some of the stuff that they’re going through. But I’m not them, and like I said, I know my value.”

At this point, #Chargers RB Melvin Gordon’s holdout is expected to continue into the season, sources say. Contract talks have not progressed as he hoped, and he’ll continue to train in Florida for the foreseeable future.

Over four seasons, Gordon has rushed for 3,628 yards and 28 touchdowns through four seasons. He has crossed the 1,000-yard mark just once back in 2017.

Gurley entered the league the same year as Gordon and has racked up 4,547 yards and 46 scores for the other team in Los Angeles. On the other hand, Johnson has produced less than both with 2,783 yards (but 31 touchdowns). However, Johnson did miss the 2017 season with a dislocated wrist. 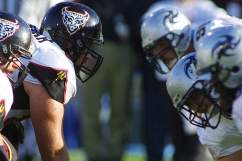 Ekeler is the projected starter at this point, as he is the most productive remaining rusher on the roster. He tallied 106 carries for 554 yards and three touchdowns last season. At five yards a pop, that’s ample enough pressure to take off of Phillip Rivers and the passing game.

He also has over 400 yards receiving, making him a more versatile option than Gordon. To take the load off, second-year back Justin Jackson can slide in and push for first downs. He notched 50 carries for 206 yards and two scores after setting Big Ten and school rushing records at Northwestern in 2017.

Newsome had just 11 touches for 49 yards last season. If injuries start cropping up for the Chargers, someone like Jay Ajayi could be an emergency fill-in option. 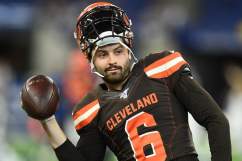 Read More
Los Angeles Chargers, NFL
Melvin Gordon's holdout may last even longer than expected based on a recent report from Ian Rapoport.