Getty Nick Kyrgios of Australia returns a shot from Yoshihito Nishioka of Japan during Day 4 of the Citi Open at Rock Creek Tennis Center on August 1, 2019 in Washington, DC.

The singles portion of the Citi Open concludes Sunday in Washington (D.C.). On the men’s side, Nick Kyrgios of Australia will face third-seeded Daniil Medvedev of Russia. The winner will take home $384,120 and the runner-up will pocket $188,315.

On the women’s side, it’s a battle of unseeded foes as Italy’s Camila Giorgi will play American Jessica Pegula. That winner is expected to make $43,000, while the loser will rake in $21,400.

The Citi Open Tennis website explained the disparity in payouts between the genders.

The ATP (the men’s tennis international governing body) and the WTA (the women’s international governing body) are two separate tours with distinct tournament structures, calendars, and funding models. Tournament like ours that offer both men’s and women’s tennis do not always combine events with the same tour tier levels. This results in the difference in prize money and international television coverage, which is among the considerations that dictate court schedules.

For example, the China Open features a WTA Premier mandatory event with an ATP World Tour 500-level event. The prize money, in this instance, is higher for the women’s event because of the difference in the tour tier levels.

Some tournaments such as Wimbledon pay the same. According to ESPN, the Grand Slam tournament instituted equal pay in 2007.

Kyrgios, Medvedev and Giorgi have all earned six figures over their respective careers. The Australian youngster has tallied $7,383,048 between his singles and doubles careers combined. Medvedev is next highest at $4,228,168, while Giorgi isn’t too far behind at $3,606,113. Since turning pro in 2012, Pegula has accumulated $754,354, per her WTA profile.

Kyrgios Making a Splash in the Nation’s Capital

Nick Kyrgios Prime, shoe delivery at your feet in 2 minutes.

Kyrgios has only won five ATP titles heading into Sunday in the nation’s capital. They came at Acapulco earlier this year, Brisbane last season, and Tokyo, Atlanta and Marseilles in 2016.

His energetic and enthusiastic attitude has not only led to strong play, but media attention. Per the Associated Press, his match with top-seeded Stefanos Tsitsipas led to a particularly humorous moment involving a broken sneaker.

Tsitsipas says friction from the way he slides on hard courts leads to problems with his sneakers’ laces, which is why he has been changing footwear during matches. That bothered his quarterfinal foe, Benoit Paire, so much that Paire went and yanked off a shoe himself in a sort of protest.

This time, a ball boy brought a problematic shoe to Tsitsipas’ father — who is also his coach — up in the stands for fixing. Kyrgios leaned on a screen at the back of the court, then decided to help things along by getting that sneaker from his dad and carrying it across the court to Tsitsipas. Kyrgios presented it on bended knee, with head bowed, as if to say, “Here, my lord.”

He is expected to start the finals match with Medvedev at 5 p.m. Eastern time on Tennis Channel. Giorgi and Pegula will precede the match at 2 p.m. 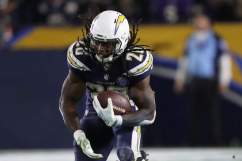