Getty Justin Thomas of the United States celebrates after his eagle on the 16th hole during the third round of the BMW Championship at Medinah Country Club No. 3 on August 17, 2019 in Medinah, Illinois.

Hideki Matsuyama’s course record stood for just one day. After the Japanese golfer recorded a 63 on Friday at the BMW Championship in Medinah (Ill.), Justin Thomas beat that by two strokes on Saturday.

The 26-year-old American birdied on each of his first five holes and posted a pair of eagles on the back-9. After entering the day two behind Matsuyama, he now sits atop the leaderboard at an astounding 21-under par entering Sunday.

Tony Finau trails by six strokes at 15-under, while Rory Sabbatini and Patrick Cantlay both sit just one stroke behind that. Barring a collapse from Thomas, the three will just be fighting for runner-up status. 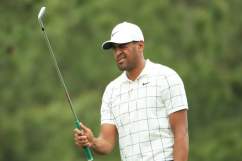 Tony Finau Career Earnings: How Much Money Has the Golfer Won?

Thomas entered the week ranked No. 15 in the FedEx Standings. His 12th-place finish at last week’s Northern Trust ensured his spot in the BMW Championship. His dominant Saturday in Illinois essentially guarantees that he’ll move onto next week’s Tour Championship with a chance to win his first FedEx Playoff title since his 2017 victory.

It’s been a “close but no cigar” type of season for the Kentucky native. He has earned five top-10 finishes, including second place at the Genesis Open and a pair of third-place showings at the Waste Management Phoenix Open and Sentry Tournament of Champions.

Along with his previous FedEx title, his biggest accomplishment came with his win at the 2017 PGA Championship. Should we win at Medinah, he would earn a $1,665,000 in prize money. If he carries that onto next week in Atlanta, he could see as much as $15 million more.

Here are some highlights from his outstanding effort on Saturday.

Justin Thomas HOLE OUT FOR EAGLE?

Can anybody stop JT right now??pic.twitter.com/P23quXT3PJ

Justin Thomas walking it right into a share of the lead.pic.twitter.com/HSlH6elyZB 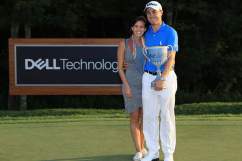