Getty Deshaun Watson #4 of the Houston Texans and Aaron Rodgers #12 of the Green Bay Packers meet after the Packers beat the Texans 28-26 in a preseason game at Lambeau Field on August 08, 2019 in Green Bay, Wisconsin.

Aaron Rodgers will miss the Packers’ second preseason game against the Ravens Thursday night, Green Bay tweeted. He is being held out due to “tightness in his back.” Packers social media announced that the move is precautionary.

This denies the first live action collaboration between Rodgers and his new head coach Matt LaFleur. This was not the plan, as LaFleur “had planned to play all of the offensive starters, except RB Aaron Jones (hamstring tightness)” for about a quarter against the Ravens.

Backup Deshone Kizer completed 8-of-13 passes for 104 yards and a touchdown in the preseason opening 28-26 victory over the Texans. Third-stringer Tim Boyle connected on 3-of-5 throws for 40 yards and two scores.

The partnership between the longtime Packers quarterback and the new head coach has been the subject of media scrutiny all offseason. Rodgers, in particular, has downplayed much of it, calling any potential discord between the two “fake news.”

Meanwhile, his former teammate Greg Jennings was recently quoted as saying that Rodgers and LaFleur “isn’t going to work.” For now, the football world will have to wait at least another week to see if this is true.

Green Bay kicks off at Baltimore at 7:30 p.m. Eastern time. You can watch on local listings or stream on the NFL app. 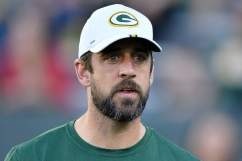 Read More
Aaron Rodgers, Green Bay Packers, NFL
Aaron Rodgers will miss his preseason opener versus the Ravens due to back tightness. DeShone Kizer will get the nod instead.