The first leg of the United States women’s national soccer team’s Victory Tour begins Saturday night against Ireland at the Rose Bowl (10 p.m. Eastern time, ESPN2). Just one month ago, the Americans rolled to a second straight World Cup title with a 2-0 victory over the Netherlands.

According to Pro Soccer USA, more than 32,000 tickets had been sold for the Ireland match as of Thursday afternoon. For a stadium that seats 90,888, that means there’s still tons of availability for those still jazzed about the program’s fourth-ever World Cup title.

StubHub, Ticketmaster and Vivid Seats are all still selling reasonably-priced tickets as of Saturday morning. StubHub has endzone seats for all of $37, as well as sideline seats at midfield for under $140.

Ticketmaster is still presenting some good deals, as there are still sideline seats for just $75. Endzone seats are pretty much $40 across the board. If you want to sit behind the benches, the cheapest you can find is $100-$125.

Vivid Seats presents less expensive seats in the endzone, but less availability everywhere else. The cheapest on the site is currently $31, while you can’t get a seat behind the teams’ benches.

This is in stark contrast to the World Cup prices. The day after the USA-France quarterfinal was announced, locals in Paris scrambled for tickets that averaged $425 with some going for as much as $5,100, according to Tom Schad at USA Today.

“Soccer is the most popular sport worldwide,” Jill Krimmel, StubHub’s general manager for sports, said in a statement provided to USA TODAY Sports, “and we are pleased to see how the USA’s performance is turning heads.”

The final, since host nation France wasn’t involved anymore, was slightly less expensive. Viagogo showed tickets as cheap as $236 for corner seats. Some decent sideline and lower deck seats were going for under $500, while the most expensive are as high as $1,127.

In short, if you want to see the best team in the world in one of the more scenic settings in all of sports, you’re set to get a good deal.

The Victory Tour is set for five games against three countries. It will also send the team to cities such as Pasadena, Philadelphia, St. Paul, Charlotte and Chicago.

These will be the last five games for head coach Jill Ellis, who announced that she will step down earlier this week. Along with a pair of World Cup titles, her overall record with the program is 102-25, including 13 wins and just one loss in the World Cup. 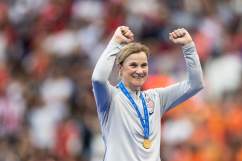 While main stays such as Alex Morgan, Megan Rapinoe and others will participate (to gin up interest in fans), this is also an opportunity for the next generation of the USWNT to shine against a lowly Irish squad. They have lost five in a row dating back to a 2-1 win over Slovakia in the UEFA group stage.

Here’s what’s on the docket for the USWNT, along with dates and TV coverage. Courtesy of Pro Soccer USA: