Allen Hurns’ return to the Cowboys did not go the way the receiver wanted after sustaining a brutal hit early in the first quarter. Hurns was coming across the middle of the field when Jeff Heath collided with the former Cowboys receiver as he attempted to catch the ball.

Hurns walked off the field but went through the concussion protocol. Fox Sports’ Pam Oliver reported that Hurns is out for the game with a concussion.

You may remember Hurns sustained a horrific leg injury while with the Cowboys last season. Heading into his return to AT&T Stadium, Hurns spoke about his previous injuries.

“I didn’t know like the severity of it, but I felt like something was a little odd,” Hurns told the Miami Herald. “Once I seen it, that’s when I actually freaked out. … This one, I just felt like something was wrong but it wasn’t the worst pain of my life. But what did it hurt was when they got to me and put it back in place. That s— hurt.”

Cowboys head coach Jason Garrett praised the receiver and discussed his professionalism while he was with Dallas.

“He’s been such a professional throughout his career, certainly in his time with us and then all throughout his rehab process,” Garrett noted to Miami Herald. “Just handled things the right way. His body responded and he’s back in action, playing as well as ever.”

Earlier this year, Hurns sustained a dislocated ankle and fractured knee in the Cowboys playoffs matchup against the Seahawks. Hurns made the journey back to the field, but the latest injury is a setback in Hurns’ return. It has to be especially frustrating for the receiver given he was looking forward to having a big outing against his former team.

“It’s crazy for me, especially [happening in] the first playoff game,” Hurns said, per Miami Herald. “I had had injuries in the past. The week before, the week of, I was saying, ‘I’m proud that I made it through the whole season healthy.’”

Hurns earlier injury also occurred on a tackle, but hopefully, the receiver is not sidelined too long this season as he recovers from the concussion.

Hurns had hardly played at all as the hit took place on one of the first Dolphins offensive drives. Oliver reported some of the Dolphins believed a penalty should have been called on the play, but Fox analyst Charles Davis noted on the broadcast that Heath was playing the ball.

“Oh my god. That was absolutely brutal. And of course it was former Cowboy Allen Hurns, who went down in damn-near the same part of the field in the playoffs last year. That was tough to watch,” DallasCowboys.com’s David Helman tweeted. 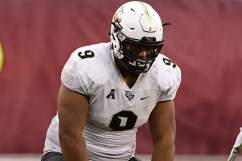