Getty Antonio Brown's debut with the New England Patriots will not happen in Week 1.

There has been no sign of Antonio Brown in Foxborough during Sunday Night Football, but it looks like the newest Patriot is tuning in to the New England-Pittsburgh game. Brown took to Instagram just before kickoff to post photos of Patriots fans holding up signs referring to the big signing.

“Excited to get to work lets go tonight #PatNation #Honor#MovinAndBoomin,” Brown noted on Instagram as the Patriots were about to take on the Steelers.

excited to get to work lets go tonight #PatNation #Honor#MovinAndBoomin

Brown made several posts to his Instagram Story featuring what appeared to be his trip into the Boston area. Brown also posted photos of Patriots fans making cakes with his picture on it.

There are some fans and media members alike that believe Brown landing with the Patriots was all part of his plan. In this scenario, Brown’s antics were a necessary evil to get him out of Oakland and to the defending Super Bowl champs. ESPN’s Chris Mortenson reported that Brown sought out social media experts to help “accelerate” his release from the Raiders.

“Antonio Brown sought advice from social media consultants on how he could accelerate his release from the Raiders, [according] to @mortreport,” ESPN tweeted.

Tom Brady Was “1,000 Percent in” on the Antonio Brown Signing & Offered to Let AB Stay With Him

It sounds like Tom Brady showed zero hesitation when asked about the Patriots taking a bit of a risk by signing Brown. Not only did Brady co-sign on the new Patriots receiver, but the New England quarterback also offered him a spot at his house.

Brady is “1000 percent in” on the signing, per NBC’s Al Michels. Yahoo Sports detailed the report of Brady’s enthusiasm about the new deal.

Brady has also offered to have Brown stay with him while the WR figures out where he’s going to live.

Brown was not eligible to play Week 1 against the Steelers because he was not on the roster at the game deadline, but the wide receiver can make his debut as soon as Week 2. Pro Football Talk’s Mike Florio reported on Sunday Night Football that it will be up to Brown and how he grasps the new offense as to whether he will play against the Dolphins.

The good news for Brown is Miami looks like it might be one of the worst teams in football. It is too bad Brown was not eligible to play Week 1 against the Steelers as it would have been must-see television. 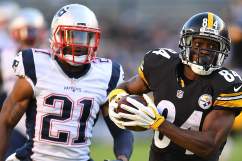