Getty The Patriots are a team that had been heavily linked to Antonio Brown.

Antonio Brown fantasy owners have weathered a lot of storms, but the good news is things seem to be solved for now as the Pro Bowl wide receiver signed with the Patriots. While Brown’s fantasy value likely takes a slight hit, the wide receiver still has high-end potential as long as he actually finds the football field.

Brown’s fantasy outlook with the Raiders would have been higher than the Patriots as he was set to see the lion’s share of the targets. While the Patriots have a more crowded receiving group, Brown still has the chance to slide into the WR1 role if he can avoid the self-sabotage we saw with the Raiders.

The Patriots Signed Antonio Brown to a One-Year, $15 Million Deal Indicating They Plan to Make Good Use of the Wide Receiver

The Patriots already have both Julian Edelman and Josh Gordon but neither receiver is without questions. Gordon has not made it through a full season in years and still has a lot of volatility despite being reinstated by the NFL. Edelman has been a staple of the Patriots offense but has battled injuries throughout his career.

New England had a number of targets that opened up this offseason when Rob Gronkowski retired. Bill Belichick has shown a knack for getting the most out of troubled players who have burned bridges elsewhere.

The Patriots are hoping Belichick can work his magic, while Brown is able to parlay the 2019 season into a new long-term deal. The Patriots signed Brown to a one-year, $15 million deal indicating they have big plans for the volatile wide receiver, per ESPN’s Adam Schefter.

“Antonio Brown and the Patriots reached agreement on a 1-year deal worth up $15 million that includes a $9 million signing bonus, per source,” Schefter tweeted.

AB Is Not Eligible to Play Week 1 vs. Steelers

As fate would have it, the Patriots play the Steelers in Week 1, but the wide receiver is not eligible to play against his former team. NFL Network’s Mike Garafolo reported that Brown had to be on the roster by 4 p.m. on Saturday, September 7 to be eligible to play.

“Antonio Brown can’t play Week 1 because he wasn’t on the roster by 4pm today, which means he can’t play against the #Steelers tomorrow, which is the only thing this whole saga is missing,” Garafolo tweeted.

Brown may not be in your fantasy lineup this week, but barring another meltdown he will help you the rest of the season. Brown is unlikely to have 1,297 yards and 15 touchdowns that he had in 2018 with the Steelers, but he still has a strong chance of finishing as a top-24 fantasy receiver this season with upside for more.

Even though it may be tempting to trade Brown to anyone that sends you an offer, you would be wise to hold the wide receiver until he has a breakout game with the Patriots. Brown’s value is still lower than normal after the plethora of drama that surrounded his tenure with the Raiders. All that should change once fantasy owners see that he can still play football. 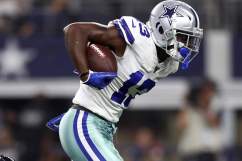