Not only is Tom Brady on board with the Patriots signing Antonio Brown, but the quarterback offered for the wide receiver to stay with him until he finds a permanent place. Given Brady’s offer, it is hard not to have images of the movie Step Brothers with Brady and Brown playing starring roles.

Al Michels detailed Brady’s initial response to the Patriots signing Brady noting he was “a million percent in” and even invited the wide receiver to stay at his house as Sports Illustrated detailed.

“Brady told Brown to ‘come move in with me until you get settled into New England,'” Michaels said…

Michaels also discussed his conversation with Patriots owner Robert Kraft, who told Brady about the signing.

Brady initially told Kraft he was “100 percent in” on the signing, but went back to tell Kraft that he is “one million percent in.”

Brady spoke with NBC Sports’ Peter King at length about the Patriots newest receiver. Brady’s comments coincide with Michels’ report about the franchise quarterback being excited about the signing. Brady admitted he had a “lot of positive emotion” when the signing was announced.

“There was a lot of positive emotion when it happened, but you know, everybody says, Whoa, this is what it can be, and what potential they have,” Brady noted to NBC Sports. “But you know, the teams I’ve been on, they go to work. The NFL’s a competitive place. Lots of moving parts. Lots of adjustment, constantly. Week to week, a guy gets hurt, a guy gets picked up you don’t know, you’re constantly manipulating your team…Now we’ll add Antonio, and he’s got to … there’s a lot to learn. … The point is, it’s one thing to talk about, it’s another thing to go do it. Let’s go do it. That’s what my attitude is.”

Brady may not want to talk about it, but Brown wearing a Patriots uniform is going to be the major NFL storyline heading into Week 2. Brown is eligible to play this Sunday against the Dolphins if the receiver feels ready, and the Patriots are willing to roll him out with a new offense.

Bill Belichick Did Not Comment on the AB Signing

“I’ll talk about the game and players on our team.” pic.twitter.com/hJOBWf6RfD

“No. Next,” Belichick said, per Pro Football Talk. “…Yeah, no, I’ll talk about the game and the players that are on our team. I thought they did a great job tonight. Offensively we had some balance and made some big plays, had a couple of big throws down the field for touchdowns and big gains. Anytime you can get those explosive plays that helps open things up.” 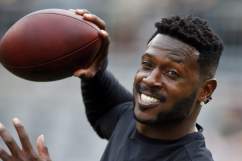