Family Night with my little family?✨

Packers wide receiver Davante Adams is a proud new father after his wife, Devanne (formerly Villarreal) Adams, gave birth to a baby girl, Deija Leigh Adams. Davante announced the news after the Packers’ Week 3 victory over the Broncos. Green Bay Press-Gazette’s Ryan Wood reported that the wide receiver missed a Packers’ practice to be with his wife for the birth of their child.

“Quite the week for #Packers WR Davante Adams. He missed Friday practice to be with wife Devanne for birth of their new daughter, Deija Leigh Adams. Returned today to catch 4 passes for 56 yards in victory. ‘Now,’ he said, ‘I’m playing for a stronger purpose than I was before,'” Wood tweeted.

Davante initially announced that Devanne was expecting on July 4th with a picture on Instagram.

“My life been full of blessings…happy to announce the biggest one yet. Baby girl Adams will be joining us in September ? Happy 4th!!! ????,” Davante posted on Instagram.

Devanne also took to Instagram and posted a video of the couple announcing they were expecting a girl.

“Baby Girl Adams? #TheAdamsFamily is getting a little bigger this September! Can’t wait to meet our baby girl? s/o to my little brother @loganvonne for making us this cute video,” Devanne noted on Instagram.

The couple has yet to post a photo of Deija but fans will be anxiously awaiting the first Instagram post featuring the newest member of the Adams family.

Davante and Devanne met in college while they were both attending Fresno State, per the Fresno Bee. The couple celebrated their one-year wedding anniversary over the summer. Davante proposed by organizing a trip to the Bahamas where the wide receiver told his future wife that they would be doing a photoshoot.

“Thought we were just doing a casual photo shoot.. little did I know he had a bigger plan❤️ Davante thought out the most perfect, creative, heart felt, breathtaking proposal Still can't believe it #ISaidYES #FutureMrsAdams #Engaged #Fiancé #TheAdamsFamily,” Devanne noted on Instagram after the proposal.

Devanne Noted That Davante “Doesn’t Act Like a Celebrity”

My life been full of blessings…happy to announce the biggest one yet. Baby girl Adams will be joining us in September ? Happy 4th!!! ????

Davante has emerged as one of the top wide receivers in the NFL, but those close to the Packers star note that not much has changed. Devanne emphasizes that her husband is still the same person he was when they met.

“He doesn’t act like a celebrity,” Devanne explained to Bleacher Report. “He’s the same old Davante.”

Coming out of Fresno State, Davante did not enter the NFL with the acclaim of some of his peers. It has been a journey to becoming the top receiver for one of the most storied teams in the NFL.

“I’ve been through everything, where nothing at this point could faze me,” Davante told Bleacher Report. “You have to appreciate the slow grind because success is not going to happen overnight. It can happen overnight, but that’s not my journey.” 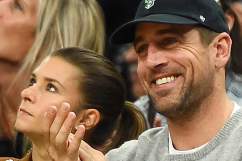