Getty Leonard Fournette is looking for his first touchdown of the season.

NFL Week 3 has arrived as the Titans take on the Jaguars leaving fantasy owners with a few lineup decisions for Thursday Night Football. We breakdown the top fantasy options in our TNF edition of Start ‘Em, Sit ‘Em. Be sure to check out our expanded Week 3 edition of Start-Sit for the entire slate of NFL games.

The good news is there is football on tonight, but the running backs are about the only viable fantasy options for Week 3. Leonard Fournette and Derrick Henry can both be started with confidence as RB2’s with upside. Delanie Walker is another start for the majority of fantasy teams with the Titans tight end on your roster.

There is not a Titans wide receiver that you can start with any level of certainty. The Jaguars offense continues to possess upside as Gardner Minshew gains more experience. D.J. Chark and Chris Conley are nice stashes, but should only be started in the deepest of leagues.

Both have had two straight weeks of production, but we would like to see one more strong outing before putting them in your lineup. Chark is the early favorite to be the Jaguars top receiver, but we are dealing with a small sample size. Feel free to follow me on Twitter @JonDAdams and send along your fantasy football questions.

Here is a full rundown of the best fantasy football lineup decision for the Titans and Jaguars.

Derrick Henry & Leonard Fournette Are Both Starts for Week 3

GettyDerrick Henry #22 of the Tennessee Titans runs with the ball against the Indianapolis Colts at Nissan Stadium on December 30, 2018 in Nashville, Tennessee.

Leonard has yet to find the endzone but has been more involved in the passing game with four receptions each week. Look for Fournette to score more fantasy points moving forward. Henry and Fournette are in the RB2 range for Week 3.

D.J. Chark Is the Top Fantasy Wide Receiver for the Jaguars-Titans

GettyD.J. Chark is one of the top waiver wire pickups for Week 3.

Ideally, you are not starting any of the wide receivers playing tonight. D.J. Chark is the top fantasy wideout and is in the WR3/WR4 range for Week 3. Chark is better served as someone you are stashing on your bench rather than inserting in your starting lineup until we see how the Jaguars offense plays out under Gardner Minshew.

Dede Westbrook has been underwhelming so far this season after a summer of massive hype. It looks like Westbrook’s fantasy value took a big hit with Nick Foles’ injury. Westbrook cannot be started in any league and is on the verge of being droppable unless he can breakout soon.

Chris Conley has been a consistent threat for the Jaguars but has limited upside so far. Conley is worth rostering but like Chark is someone you are only starting in deeper leagues.

The Titans receivers are a bit puzzling as tight end Delanie Walker appears to be the team’s top receiving option. Corey Davis and Adam Humphries are not starting in your lineup, and there are likely better options on your waiver wire. Rookie receiver A.J. Brown is someone to keep an eye on and can be rostered in deeper leagues.

Brown is not yet getting the work to be in your lineup, but that should change by the end of the season. Brown is averaging the second-most targets on the Titans with 4.5 per game, a number that is likely to go up as he sees more snaps.

Marcus Mariota & Gardner Minshew Are Sits in Most Leagues

Unless you are in a two-quarterback league, Mariota and Minshew are not starts for Week 3. Minshew does have some upside with his rushing ability but will need to hold on to the football for him to prove reliable.

If you are in a two-QB league, both are likely starters given how many quarterbacks are already sidelined. Mariota has yet to consistently prove he can be the long-term answer for the Titans at quarterback.

Delanie Walker Is a Start at Tight End for Week 3

GettyTennessee Titans tight end Delanie Walker is off to a nice start.

Walker is leading the Titans in targets and can be started as a low-end tight end this week. If you are one of the few owners that have two startable tight ends, players like Darren Waller and Mark Andrews should be started above Walker. Chances are Walker is your best tight end and is going to continue to see targets in Week 3. 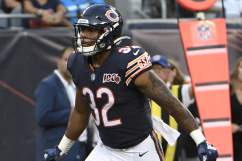