Getty David Montgomery is a player to watch for Week 3.

The injury report has unfortunately become a must-read for fantasy football players making it hard to set your optimal lineup. As we go through my Start ‘Em, Sit ‘Em Week 3 predictions, there is still a lot of moving parts across the NFL. For most leagues, there are plenty of available quarterbackS, but the loss of multiple starting QB’s makes it difficult to know which wide receivers to trust.

While you are not benching Michael Thomas or JuJu Smith-Schuster, their fantasy value does take a bit of a hit with the loss of Drew Brees and Ben Roethlisberger. The good news for Thomas and the Saints offense is that Brees will eventually return. Things are less clear in Pittsburgh as Mason Rudolph takes over the gig for the rest of the season.

A few tips to keep in mind when considering lineup decisions. Asking yourself what is most likely to happen will help you make the wise lineup decision, rather than projecting hopes on a player that are unrealistic. The Vegas odds can also be a strong resource for fantasy players.

When things are close between two players, going with the individual that will be playing in a game with a higher point total can be a good tiebreaker. As always, feel free to reach out on Twitter @JonDAdams with lineup or general fantasy football questions.

Here is a look at my fantasy football Start-Sit predictions for WeeK 3.

GettyJimmy Garoppolo had a nice bounce-back performance in Week 2.

Quarterback is a difficult position with the number of early injuries we have seen so far this season. Garoppolo and the Niners have played their first two games on the road. Jimmy G finally gets a home game against a seemingly bad Steelers team.

After struggling in Week 1, Garoppolo seems to be finding his footing as the 49ers quarterback threw for 297 yards and three touchdowns while completing 68 percent of his passes in the team’s offensive explosion against the Bengals. Garoppolo should hover around being a top-12 quarterback in Week 3.

Newton has a plus matchup this week against the Cardinals, but you want no part of the Panthers quarterback until he proves he can bounce back. Newton has struggled to start the season, and there is no signs that the Panthers quarterback will bounce back. He does not look like himself and you would be best served to seek other options at quarterback. There is also no guarantee Newton plays as he is battling a foot injury.

QB Starts Week 3: Josh Allen faces a Bengals defense that just gave up 41 points to the Niners. Allen has added a rushing touchdown in both games so far this season. While I would not count on the Bills quarterback to find the endzone every week, Allen’s 17 rushing attempts shows the Bills have no problem with him using his legs to make plays.

You are tentatively starting Baker Mayfield against the Rams even though it is a difficult matchup. Mayfield and the Browns offense looked improved in Week 2 but will face a strong Rams defense on Sunday Night Football. Jameis Winston has not looked great but gets the Giants in Week 3. The Bucs quarterback should have his best week yet against the Giants. Kyler Murray is also startable at home against the Panthers.

QB Sits Week 3: Derek Carr faces a difficult matchup in Minnesota, and the Raiders quarterback looks to be only a desperation start most weeks. The Bears-Redskins matchup has one of the lowest point totals in Vegas for Week 3. Neither Mitch Trubisky and Case Keenum should be in your fantasy lineup.

GettyLarry Fitzgerald has been the go-to receiver for Kyler Murray.

Fitzgerald has become a must-start as the go-to option for the Cardinals rookie quarterback. Fitzgerald ranks in the top-five for most-targeted wide receivers so far this season with 24 targets through two weeks, per Fantasy Pros. We could see a Cardinals offensive explosion against the Panthers that we have been waiting to see under Kliff Kingsbury.

After an offseason of hype, Moncrief has been a disappointment both weeks. Moncrief received just one target in a game that Mason Rudolph played the majority under center. With Rudolph in the lineup, you can expect his former college teammate James Washington to receive a boost which means Moncrief’s value goes down even more.

WR Starts for Week 3: Tyler Boyd and Emmanuel Sanders are becoming must-starts regardless of matchups. The two receivers are among the NFL leaders in targets. D.J. Moore also looks to be the clear WR1 for the Panthers and is one of the lone bright spots in a bad offense.

D.K. Metcalf and Terry McLaurin are becoming must-starts as the two rookie wide receivers look to be the WR1 in their respective offenses. Marquise Brown is another rookie wideout that can be started with confidence.

WR Sits for Week 3: It is hard to start any Packers wide receiver not named Devante Adams as their targets are likely to vary from week to week. Marvin Jones is not receiving the kind of volume that warrants a start in a difficult road matchup against the Eagles.

Titans receiver Corey Davis should not only be on your bench, but there are likely better options on the waiver wire. Davis no longer looks to be a priority in the Titans offense with the addition of new receivers over the offseason.

GettyDavid Montgomery could have a breakout performance against the Redskins.

Fantasy owners have had a lot of anxiety over whether to start Montgomery each week, but there are a few reasons why we could see his best NFL game yet. Montgomery received a sizable workload with 18 carries but struggled with efficiency averaging just 3.4 yards per carry. Montgomery faces a Washington defense that is second only to the Dolphins for the most rushing yards allowed at 168 yards per game. We can expect a great game for the Bears rookie running back on Monday Night Football.

Damien Williams struggled against the Raiders and was only saved by the receptions he received. The Chiefs running back faces a Ravens defense that has only allowed 41 total rushing yards all season meaning they are allowing just 20.5 yards per game on the ground. If at all possible, keep Williams on your bench for Week 3.

RB Starts for Week 3: Peyton Barber gets a nice matchup against the Giants. While it is hard to trust a Bucs running back with the varied carries, Barber appears to be earning the trust of coaches. Both Bills running backs could be in play this week against a Bengals defense that is one of the worst units against the run.

Frank Gore is likely the Bills back to trust until Buffalo hands over the starting gig to Devin Singletary who is battling an injury. Carlos Hyde gets a plus matchup against the Chargers defense and looks to have won the majority of carries for the Texans.

RB Sits for Week 3: You are not sitting either Kerryon Johnson or Le’Veon Bell, but you can expect less than ideal production given their matchups. Duke Johnson appears to have lost the Texans workload to Hyde and should remain on your bench until he is given more touches. 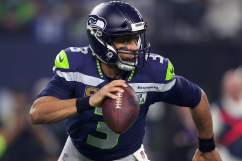