Gardner Minshew’s journey to the NFL may seem improbable, but the quarterback’s parents, Flint and Kim Minshew, have seen the work their son put into his craft. Gardner’s dad, Flint, is known for his desire to name his son Gardner II despite there not being an original namesake.

Gardner’s mom, Kim, played college basketball at Mississippi State and loves seeing her son defy the odds. Prior to Gardner getting drafted, Kim admitted that it is a bit surreal to think of her son as an NFL quarterback.

“I think it’s a little surreal,” Kim noted to The Spokesman-Review. “Like watching the [NFL] playoff games yesterday. I was sitting there watching Jared Goff and Pat Mahomes and thinking, just a few years ago they were kind of where he is. And I think, they’re not that much older than him. So it’s just, sometimes I should take a deep breath because it is surreal.”

1. The Jaguars Quarterback Is Named Gardner Minshew II, Despite Not Being Named After His Dad

One of the most intriguing parts of Gardner’s story is that there is no Gardner Minshew I. Gardner’s dad, Flint, simply wanted his son to be Gardner II which is the official name listed on the Jaguars website. Things could have been even more interesting if Gardner’s grandfather, Billy Minshew, had his wish.

Billy wanted to name his grandson Beowulf after the classic English poem. The idea never took off as even Flint admitted there had to be a line somewhere.

“My dad wanted to name him Beowulf, and that’s about as far as that got,” Flint explained to The Spokesman-Review.

What a week it has been! So glad to have spent it with my people! #GoCougs

Gardner is not the only athlete in the family as his mom, Kim, played college basketball at Mississippi State. Flint coached his son’s pee wee football team making the quarterback’s athletic skills a total team effort. Kim admits her son has always been crazy about football and learning the details of the game.

“When he comes home there’s going to be a piece of paper somewhere with X’s and O’s left around the house,” Kim explained to KREM CBS 2. “If you go up in his room, there’s plays everywhere. It’s always been that way.”

The family may have Mississippi State ties, but Gardner’s time at Washington State has helped make Pullman feel like a second home even after their son departed for the NFL.

“Flint’s said it numerous times: we’re not finished with Pullman,” Kim said, per 247 Sports. “Whenever Gardner wants to go back, Flint is ready to go back with him. I think that says it more than anything else. The people, the environment, it just feels like home. Gardner feels so connected and we do too. We will fly Ol’ Crimson in front of our house for years to come.”

3. Gardner Is From Brandon, Mississippi & Went to College at Washington State

Meet the Minshews: KREM sits down with Gardner Minshew's familyGardner Minshew was a star quarterback who attracted national attention at Washington State University. KREM Sports Director Brenna Greene sat down with the Minshew family to get a glimpse into what the journey was like for them.2018-11-23T02:39:24.000Z

The Jaguars quarterback grew up in the small town of Brandon, Mississippi. Gardner’s path to the NFL has been non-traditional as the quarterback got his start at Northwest Mississippi Community College. He would later transfer to East Carolina before getting an opportunity to take over Mike Leach’s offense at Washington State.

Gardner created a lot of new Pac-12 fans in his hometown thanks to his success with the Cougars. Brandon Middle School principal Trey Rein noted they started to see a lot more Washington State jerseys during their “college day” where kids wear their favorite school colors.

“There was never going to be a week where there wasn’t some kind of mustache,” Rein told The Spokesman-Review. “… Ten months ago, I’m not sure if people here knew Washington State had a football team. And now all the sporting places around here, they struggle to keep in jerseys.”

The Minshew family has a few athletes as Gardner’s younger sister, Callie, plays college volleyball at Mississippi State. Callie was named the Gatorade state volleyball player of the year, per KREM. Gardner appears to be a proud older brother as he often posts Callie’s volleyball highlights.

“We had a spirit week day at the high school and middle school that was Dress Up Like Gardner Minshew Day,” Callie told KREM. “Everybody dressed up in mustaches and Washington State gear, aviators, caps on backwards. It was crazy going into the high school seeing teachers dressed up like my brother. It was kind of weird, but to know that he has that much support? It was kind of heartwarming.”

5. Gardner’s Mother Believes His Mustache Is Part of His Personality

Gardner’s mustache is the stuff of legends as the quarterback’s signature ‘stache has already helped make him a fan favorite in the NFL. When Gardner rose to prominence at Washington State, Kim noted to KREM that her son’s mustache is part of his way of enjoying the spotlight.

“He’s eating it up,” said Meredith with a grin. “All the videos that he’s doing all of this,” as she motions to him touching his mustache. “I’m like, ‘You’re loving it, don’t lie.’…“He’s chasing dreams, and we’re just having a great time watching. That is what he is doing, he is chasing his dreams.” 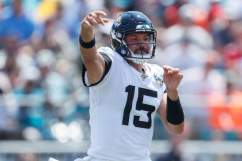 Gardner Minshew’s Contract: How Much Money Is Jaguars QB Salary?

Read More
Football, Jacksonville Jaguars, NFL
Gardner Minshew's family has been a big part of the quarterback's success. Learn more about Minshew's dad and mom along with their support off the field.