Getty Jaylen Samuels is worth a waiver wire pickup.

Jaylen Samuels had himself a night against the Bengals causing his fantasy football value to continue to rise despite being behind James Conner on the depth chart. Heading into the fourth quarter, Samuels had more touches than Conner as the Steelers used the versatile player all over the field. If Samuels is available in your league, you should add him off your waiver wire. Be sure to check out our full fantasy waiver wire rankings for Week 5.

It was reminiscent of how Samuels was utilized in college at NC State where he spent time at tight end, running back and wide receiver. Whatever position you want to categorize Samuels, the one descriptor that fits best is the title of playmaker. With the current scarcity at running back, Samuels should be the top waiver wire add at the position in most leagues.

Through three quarters of play, Samuels had eight carries for 28 yards and a touchdown along with six catches for 45 receiving yards. Samuels even had two passes for 28 yards.

Samuels Has Been Described as the Steelers New “Christmas Toy”

Samuels is in his second NFL season, but it seems that the Steelers are just starting to fully utilize his versatility. During training camp, The Athletic reported that Steelers offensive coordinator Randy Fichtner appears to have found a new “Christmas toy” with Samuels.

Samuels is like Randy Fichtner’s Christmas toy that he didn’t learn to play with until the following year. Last year, the Steelers wanted to see if Samuels was a professional football player. This year, he’s been a significant part of their offense, whether it’s been the backup running back or, more importantly, that jack-of-all-trades offensive weapon that can line up just about everywhere. Samuels has been a matchup nightmare for the defense in camp because he’s more than just a running back who can catch.

The Steelers Running Back Is Worth a Stash on Your Bench

Just because you pick up Samuels does not mean you have to insert him immediately into your starting lineup. We want to see the Steelers utilize Samuels more consistently before we put him in our lineups. Samuels’ performance against the Bengals could be the start of Pittsburgh making the running back more of a priority in their gameplan.

While Conner played well against the Bengals, he has not run away with the job so far this season. It is possible that Samuels could continue eating into Conner’s touches even if he does not become the starter this season. Heading into the season, Steelers head coach Mike Tomlin praised Samuels’ improved conditioning when compared to his rookie season.

“Really, it just starts with the overall level of conditioning,” Tomlin said, per Steelers Depot. “There really is a significant difference in his level of conditioning in this setting this year as opposed to last year, and it’s reasonable to expect that. The same can be said for James Washington. But I think it’s been a springboard for both guys and others in their class to get an increased level of production and consistency, and we’ve gotten that from him”. 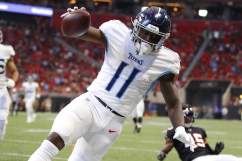 Read More
Fantasy Football, NFL, Pittsburgh Steelers
Should you pick up Jaylen Samuels from your waiver wire? Find out the latest on Samuels fantasy football value and why he is a top target to add.