Andrew Luck’s sudden retirement came as a surprise to most given the announcement was just a few weeks before the season was about to start. Luck’s retirement was directly tied to a string of injuries that the Colts quarterback dealt with towards the end of his career. The latest ailment was a calf injury that seemed to drag on during training camp longer than expected.

“I’ve been stuck in this process,” Luck said, per Bleacher Report. “I haven’t been able to live the life I want to live. It’s taken the joy out of this game. … The only way forward for me is to remove myself from football.”

The news broke during a Colts preseason game prompting an impromptu press conference after the matchup. There was a more formal presser originally planned for later on in the preseason. What became clear is that Luck dealing with the rehab process multiple times had taken away his passion for football. The Athletic’s Zak Keeefer tweeted out a list of some of the injuries Luck battled in recent years.

Physical toll on Andrew Luck through 6 NFL seasons:
» Torn cartilage in 2 ribs
» partially torn abdomen
» a lacerated kidney that left him peeing blood
» at least 1 concussion
» a torn labrum in his throwing shoulder
» and this mysterious calf/ankle issue that led to this

Luck Wants to “Travel the World” During His Retirement

As for where Luck is today, there has been no word from the former quarterback since his quick press conference. NFL Network’s Ian Rapoport reported that Luck had been thinking about retiring for a few weeks prior to the announcement. One of the things that the former quarterback wanted to do after football is “travel the world.”

“The #Colts have known that QB Andrew Luck was seriously mulling retiring for at least two weeks. He’s married, he plans to travel the world, and once the love for the game waned, it sounds like he wanted to step away. So, he did,” Rapoport tweeted.

Luck’s Wife, Nicole, Is Pregnant With Their First Child

Over the offseason, Luck married longtime girlfriend, Nicole Pechanec. Luck’s thoughts were on more than simply traveling the world as his new wife is pregnant with their first child. Prior to his retirement announcement, Luck noted to WTHR that he is “really excited, but terrified” about becoming a father.

There has been no word about the official due date for the newest member of the Luck family. Luck called their recent wedding the “best day of his life.”

“It was awesome,” Luck explained to the Indy Star. “It was the best day of my life, and probably the best offseason I’ve ever had…It’s great. We’ve been together for a decade, so not much has changed besides the ring on the finger, and she’s got great insurance now.”

Luck Is Unlikely to Come Out of Retirement & Play Football Again

Given the suddenness of the announcement, some fans are wondering if Luck could ultimately come out of retirement and play again. So far, Luck has given no indication that he will play again, but Colts owner Jim Irsay refused to rule out a possible return.

“I don’t rule it out,” Irsay told USA Today. “Because as quickly as this thing sort of descended upon us, and as mysterious as it was coming upon us, it could leave the same way. … I would say it’s possible.” 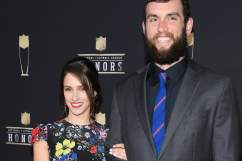