Russell Wilson and wife, Ciara, are both successful entrepreneurs and the couple recently added to their portfolio by becoming part of the MLS’ Seattle Sounders’ ownership group. The Sounders announced in August that Wilson and Ciara are part of 11 families that joined the Sounders’ ownership group including hip-hop artist Macklemore along with actor Drew Carey. Adrian Hanauer is the majority owner of Seattle’s MLS team.

“Seattle means so much to me and Ciara,” Wilson told SoundersFC.com. “We’re fired up about being part of the Sounders for a long, long time, having ownership in the Sounders and continuing to build that winning culture. When I got here in 2012, Seattle was a place that I felt I could call home forever. And obviously because of the Seahawks, and now because of the Sounders, it makes that really come to life. This city is a special place. The Pacific Northwest is a place we love and we get to raise our kids here and have a lot of fun while doing it. We want to bring the best soccer players in the world right here to Seattle.”

It did not take long for Wilson to outline the group’s goals when it comes to players. The Seahawks quarterback noted that he wants to see the best in the world play in Seattle.

“We want to bring the best soccer players in the world to Seattle,” Wilson explained to CNN.com.

Here is a look at the video Wilson posted on Instagram announcing the news.

Football. Fútbol. We Love them both! @Ciara and I are fired up to announce we are Team Owners of the @Soundersfc one of the best franchises in the world! We can't wait for our kids to grow up loving Soccer! Family is everything! We Love You Seattle! #SoundersIsFamily ⚽??

Ciara noted that becoming part of the Sounders’ organization was a significant moment for their kids as well. The couple has a daughter, Sienna, while Ciara also has a son, Future, from a previous relationship.

“This is not only a special moment for Russ and I, but for our kids as well,” Ciara noted to SoundersFC.com. “When we walked into the building and our kids were running around with their names on their little jerseys, it meant a lot for so many reasons. It’s an honor to join the Sounders team and have the unique opportunity to represent female ownership within major league sports. The team has already done some amazing things, but I believe the best is ahead and we’re excited to be part of that.”

Things are not all business for Ciara who took some time to record a Rush Hour reenactment with her son. Both were decked out in their Seahawks jerseys in the video that has already reached more than four million views.

Wilson & Ciara Have a Combined Net Worth of $135 Million

Ciara has an estimated net worth of $20 million, while Wilson’s number is $115 million, per Celebrity Net Worth. Wilson’s net worth was helped significantly by his new contract with the Seahawks.

Wilson signed a four-year, $140 million contract extension with the Seahawks over the offseason. Wilson is making $5 million this season but will receive a bump in pay in 2020 with an $18 million salary, per Spotrac. The Seahawks quarterback received a $65 million signing bonus and his contract includes $107 million in guaranteed money. 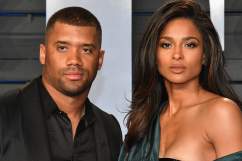