Getty Florida topped Auburn thanks to a big second half.

October is officially upon us as teams begin to separate themselves from the field, and our latest college football power rankings break down the top squads to date. It was not the prettiest game, but Florida continued to prove they are able to overcome adversity. Florida put their foot on the gas in the second half against Auburn to set up another marquee SEC matchup next week against LSU.

Kyle Trask survived a brief injury scare and came back to lead the Gators to victory as it appeared Florida was going to be down to their third-string quarterback. LSU made short work of Utah State and stud quarterback Jordan Love but will get more of a test next week against Florida.

Wisconsin pitched a shutout in their matchup against Kent State, while Texas handled West Virginia. Ian Book and the Notre Dame offense shined against a struggling Bowling Green team. For the second straight week, Michigan was able to take care of business against a Big Ten foe as the Wolverines survived against Iowa.

Both Clemson and Alabama had a bye this week, but the Tigers find themselves just outside the playoff picture in our latest rankings. If rankings are truly based on this season, Clemson has not looked like one of the best four teams, and Dabo’s squad has not had a particularly difficult schedule. There is still plenty of time for this to change, especially given LSU and Bama will square off in November.

Admittedly, with so few great teams playing each other, ranking the teams at this point is a bit of a beauty pageant. Clemson is the defending champion that has let themselves go a little bit, but the Tigers will prove if they have an extra gear with the remaining teams on their schedule.

Oklahoma and Ohio State continue to win in impressive fashion while possessing two of the best offenses in the country. At this point, separating the top six to eight teams is very subjective. The Sooners and Buckeyes have not faced major opponents, but there is no denying they win the eye test as two of the best teams in the country.

LSU may be the most tested of the top teams thanks to their win at Texas and will get another big matchup on Saturday night in Death Valley against their friends from Gainesville. It is a bit of a shock to the system to see the Tigers offense so effective.

Here is a look at our college football power rankings heading into Week 7. 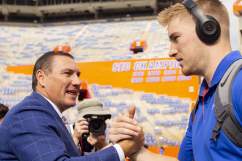 Read More
College Football, Football
Alabama, LSU, Ohio State and Oklahoma are just some of the top teams in our latest college football power rankings. Find out where your favorite team lands.