Steelers quarterback Devlin Hodges goes by the nickname “Duck” which is admittedly a puzzling title for an NFL quarterback. Why is Hodges called Duck?

The nickname started during his redshirt freshman year at Samford, because he constantly talked about duck hunting and duck calling. Coach Chris Hatcher started calling him Duck, and it wasn’t long before his receivers picked up on it.

Hodges and his family members often practice duck calling which can make for a noisy house. If football does not work out for Hodges, he may have a career as a duck caller. Hodges won the Alabama state duck calling championship in 2018 as Hodges’ mom, Amy Hodges, explained to ESPN.

“He can go months without picking up a duck call and then pick it up and go win contest,” Amy told ESPN. “To me, it’s almost like a musical instrument. You can either do it well or you can’t.”

When He Became a Steeler, Hodges’ Nickname Evolved Into “Duck Dynasty”

Since he joined the Steelers, the Duck nickname took on a life of its own as his Pittsburgh teammates and coaches call the quarterback “Duck Dynasty.” When Steelers head coach Mike Tomlin learned about Hodges’ duck calling championship, the quarterback’s nickname was upgraded to Duck Dynasty during offseason workouts, per Penn Live.

The Steelers Quarterback Has Embraced the Duck Nickname

Hodges’ appears to have a strong affinity for his nickname. His Twitter feed is full of posts about ducks and embracing this persona. Leading up to his first NFL start, Hodges posted a quote along with a few Duck emojis for good measure.

If Hodges’ play on the field matches his duck calling skills, we may hear a lot of duck calls at Heinz Field during upcoming games. Samford head coach Chris Hatcher explained to Trib Live how the nickname took off during Hodges’ college days.

“Duck is not a great nickname for a QB, but I’m just an old simple guy from Macon, Ga., and ‘Devlin’ was just hard for me to say all the time,” Hatcher noted to Trib Live. “… So he got talking about (his duck-calling skills), and I got to picking at him a little bit about it, and I said, ‘Man, I just am gonna start calling you Duck.’ And it kinda stuck. In fact in my phone, it says ‘Duck Hodges’ in there. It kinda took off from there.” 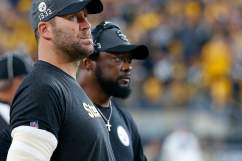 Read More
Football, NFL, Pittsburgh Steelers
Why is Devlin Hodges called Duck? Find out more about Hodges Duck Dynasty nickname and how it got started when the Steelers quarterback was in college.