Getty Earl Thomas had a complicated exit from the Seahawks.

The last time we saw Earl Thomas and Pete Carroll share the field, the star safety was giving the Seahawks’ coach the middle finger as he was carted off the field. Thomas was once a beloved member of the Legion of Boom and the Seahawks’ Super Bowl runs. Yet, after a lengthy holdout and a midseason injury, the marriage between Thomas and the Seahawks ended in an ugly divorce in 2018.

The mounting frustration of the star safety became embodied in Thomas’ not-so-subtle gesture telling Carroll he was number one after sustaining a season-ending injury. As for Thomas’ exit from Seattle, the safety admitted he believed the Seahawks wanted to “phase me out” and prioritized the linebackers over his role on the team.

“I feel like they were kind of trying to phase me out (of Seattle),” Thomas explained to The Seattle Times. “They were thinking more linebackers that you see. They’ve got the three-headed monster with K.J. (Wright), Bobby (Wagner) and (Mychal) Kendricks. And obviously, Coach (Ken) Norton is the D-coordinator. He’s a linebacker at heart, so I understood what was going on.”

Thomas will return to Seattle for the first time since signing with the Ravens, and the safety admitted he is hoping the 12’s do not boo him. Thomas was once a major part of Seattle’s success, and it will be interesting to see how Seahawks fans respond to one of the former leaders of the franchise.

“Hopefully they respect what I’ve done, get a couple of cheers and not too many boos,” Thomas said, per ESPN. “Hopefully, it’s love…Luckily, I just love the game. It doesn’t matter who I’m playing for. I’m just going out there to try to win. Maybe when I get to the visiting locker room and see how it feels, maybe it will add something to that. But, other than that, it’s business as usual. I’m going out there to make plays and try to help us win.”

One thing is certain is that there is nothing but love when it comes to Carroll’s thoughts on Thomas. When asked about the upcoming reunion, Carroll tried to take the high road when it came to Thomas.

“Obviously he was upset,” Carroll noted when asked about the gesture, per The Seattle Times. “But, my heart’s pretty big, pretty wide open to these guys from the time we spend together and all the stuff that we do. It’s way more important than some gesture or some statement. … I kind of have space for them to be themselves and how they do it and how they handle it — I’m going to love them anyway.”

In an ideal world, players and teams would move on in harmony, but as Seahawks fans have witnessed in recent years it is not that easy. Thomas joins Richard Sherman along with a number of other key players who have criticized the Seahawks since they departed Seattle. Time may heal all wounds, but Sunday might not be the day for forgiveness as Thomas squares off with the Seahawks with plenty at stake for both squads. 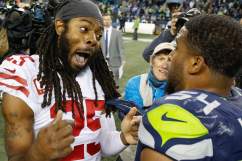