Getty Josh Gordon and the Patriots offense should thrive against the Giants defense.

The New England Patriots take on the New York Giants on Thursday Night Football and there are a few viable fantasy football players you can start tonight. My Start-Sit predictions will discuss the most difficult lineup decision for tonight’s game, but you can also check out our Week 6 picks that will cover the entire slate of NFL games.

The top Giants’ fantasy options are all expected to miss tonight’s game. Saquon Barkley, Evan Engram, Wayne Gallman and Sterling Shepard are likely to miss tonight’s contest. This means there are no Giants players you should feel comfortable starting in your fantasy lineup. Engram’s status also leaves both teams without a viable fantasy tight end worth starting in Week 6.

Rookie quarterback Daniel Jones has added excitement to the offense, but the Giants players are better left on your bench against one of the best NFL defenses. Feel free to reach out on Twitter @JonDAdams if you have specific fantasy football questions.

Here is a look at my fantasy football predictions for the Thursday Night Football matchup between the Patriots and Giants.

Fantasy Quarterbacks: Tom Brady Can Be Started, While Daniel Jones Is a Sit

GettyTom Brady has top-12 quarterback potential this week in fantasy.

Tom Brady and the Patriots continue their relatively easy start to the season with another plus-matchup against the Giants. The Patriots quarterback is coming off 348 passing yards and three touchdowns against the Redskins. We have only seen Brady struggle once this season at Buffalo when he failed to throw a touchdown on 150 passing yards. Start Brady with confidence against a Giants defense giving up a lot of passing yards.

Jones should remain on your bench against one of the best defenses in the NFL. There are brighter days ahead for the rookie who has had weeks of fantasy relevance, but the short week against a top defense is not the time to start the Giants quarterback.

Fantasy Running Backs: Sony Michel Is a Start & Jon Hilliman Is a Sit

GettySony Michel has a plus-matchup against the Giants.

Sony Michel should have back-to-back solid outings against a Giants defense giving up 130 rushing yards per game. Michel is the only running back you can start with confidence in Thursday night’s game. The Patriots’ usage of Rex Burkhead and James White has been unpredictable and neither player can be started with confidence. Both running backs could be viable dart throws in DFS games.

The Giants are banged up with Barkley unlikely to play against the Patriots, and Gallman has been ruled out as the back has not cleared concussion protocol. Jon Hilliman should not be started against a Patriots defense that is allowing the third-fewest rushing yards in the NFL.

Fantasy Wide Receivers: Julian Edelman Can Be Started as a WR2, While Golden Tate Is a Sit

GettyGolden Tate gets a difficult matchup against the Patriots.

Be sure to check the injury report on Julian Edelman before kickoff, but the Patriots wide receiver is expected to play. Assuming Edelman is in the lineup, the receiver can be started as a WR2 with upside in Week 6. Josh Gordon can also be started as a WR3 with as bad as the Giants secondary has been.

For the Giants, Shepard is out this week making Golden Tate the Giants’ top receiving option. Tate has yet to prove Jones is going to look his way, and there are no Giants receivers you can start with confidence this week. Tate falls into the WR4 category in deeper leagues. 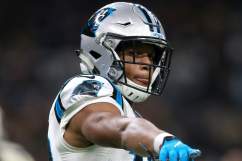