The Washington Nationals accomplished the improbable feat of going from the Wild Card game to World Series champs. The Nationals parade will take place in D.C. on Saturday, November 2 at 2 p.m. Eastern. The celebration will begin at the intersection of Constitution Ave. and 15th Street NW as Mayor Muriel Bowser detailed.

While we do not know the specific info, the good news is the Capitals just had a parade celebration. We will see if the Nationals follow a similar protocol. Here were the parade route details for the recent celebration, per the Capitals website.

When the Capitals won the Stanley Cup in 2018 the parade took place five days after the series, per WUSA 9.

When the Capitals won the Stanley Cup on June 7, 2018, the parade was held on June 12. Monumental employees, the company that owns the Capitals, were clued in to parade details on June 8.

The D.C. police department posted on Twitter that the parade is being “planned.”

“Our Washington Nationals are 2019 World Series CHAMPIONS ?⚾️?⚾️?⚾️ Celebrate responsibly | Respect each other | Thx to our officers 4 keeping everyone safe We are planning a PARADE!!!!!” D.C. police department tweeted.

For the first time in 95 years, the #WorldSeries champions are from Washington, DC.#STAYINTHEFIGHT pic.twitter.com/wxYc9XbQYo

The Nationals trailed the Brewers 3-1 in the bottom of the eighth in their Wild Card matchup. Washington was able to rally with three runs in the eighth inning to advance to the NLDS. The Nationals once again faced elimination against the Dodgers as they trailed 2-1 but were able to win the next two games to punch their ticket to the NLCS where they faced the Cardinals. Things were much less interesting in the NLCS for Washington as they swept St. Louis on their way to the World Series.

We STAYED IN THE FIGHT.

We FINISHED THE FIGHT.

To summarize, the Nationals faced elimination on three separate occasions during the postseason including the one-game Wild Card matchup Washington needed to win just to make it to a playoff series. So yes, the Nationals are going to celebrate by having a massive championship parade. Mayor Muriel Bowser praised the Nationals in a congratulatory tweet.

“When they tell you dreams don’t come true, point them towards our @Nationals. Tell them they do. Washington Nationals: WORLD SERIES CHAMPIONS District of Columbia: #SPORTSCAPITAL OF THE WORLD #FIGHTFINISHED #WorldSeries,” Bowser tweeted.

Washington City Paper’s Tom Sherwood shared his thoughts on what the parade route should be.

“Mayor – parade ’em down Pennsylvania Avenue – not Constitution. Have ’em pass by The Wilson Building. America’s Main Street is where we all belong,” Sherwood tweeted. 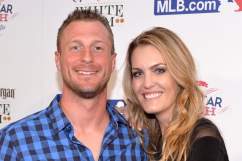