Getty Richard Sherman still has a house in Seattle.

While many fans were commenting on Seattle’s Rave Green uniforms, former Seahawks Richard Sherman and Bruce Irvin voiced their displeasure about Marshawn Lynch’s iconic No. 24 jersey not being retired. Irvin took to Twitter during the Rams-Seahawks Thursday Night Football matchup.

Sherman responded to the tweet by taking another subtle jab at the Seahawks.

“U know how smh,” Sherman told Irvin on Twitter.

The former Legion of Boom member had a difficult breakup with the Seahawks as the cornerback criticized Pete Carroll’s coaching style after leaving Seattle. Sherman also, perhaps not so coincidentally, signed with the 49ers, the Seahawks biggest rivals. After brief stints with the Raiders and Falcons, Irvin now plays for the Panthers.

“I think it was kind of philosophical on his part,” Sherman said on Joe Thomas’ podcast in 2018, per ESPN. “A lot of us have been there six, seven, eight years, and his philosophy is more built for college. Four years, guys rotate in, rotate out, and so we had kind of heard all his stories, we had kind of heard every story, every funny anecdote that he had. And honestly because he just recycles them. And they’re cool stories, they’re great for team chemistry and building, etcetera, etcetera. But we had literally heard them all. We could recite them before he even started to say them.”

Excited to be back joining the #12thman on #instagram #BeastMode #Seahawks

After briefly playing for the Raiders, Lynch appears to be retired from football for good, but the running back remains a Seahawks legend. The Seahawks have been very particular about numbers they retire. The four players who have had their jerseys retired were all lifelong Seahawks and made it to the Pro Football Hall of Fame, per The Seattle Times.

Unfortunately, Lynch will always be linked to the Seahawks decision not to give him the ball on the goal line against the Patriots in Super Bowl XLIX. Lynch continued to take the high road when asked about the situation during a 2018 interview with Matt Barnes on UNINTERRUPTED.

“At the end of the day, I’m not mad at him or who called the [play],” Lynch said, per USA Today. “But I’m going to tell you like this, when that play was called, and I saw the expression on the other 10 guys’ faces in there … when they heard the call … they looked right at me. And I’m looking like *claps* break. What y’all want me to do?”

The Seahawks & Niners Is Back to Being a Rivalry

Sherman was part of the Seahawks’ team back in the thick of the rivalry with the Niners. Now, Sherman is wearing the opposing jersey with the rivalry getting a bit of renewal thanks to the stellar play of both squads.

The two teams square off in Week 10 on a November 11th Monday Night Football matchup. There will also be a rematch during the final week of the regular season on December 29th. If both teams continue their success, we could see the season finale play a big role in the chase for the NFC West title. 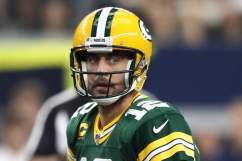